(Cape May, NJ) – Cape May Brewing Company is thrilled to announce the release of Crushin’ It, an IPA brewed with orange juice, to their release of core summer offerings. Originally conceived as a Tasting Room-only release in 2018, Crushin’ It is available now for growler fills at the Cape May Brewing Company Brewtique at 1288 Hornet Road in the Cape May Airport and will be available in cans throughout New Jersey beginning April 8th. 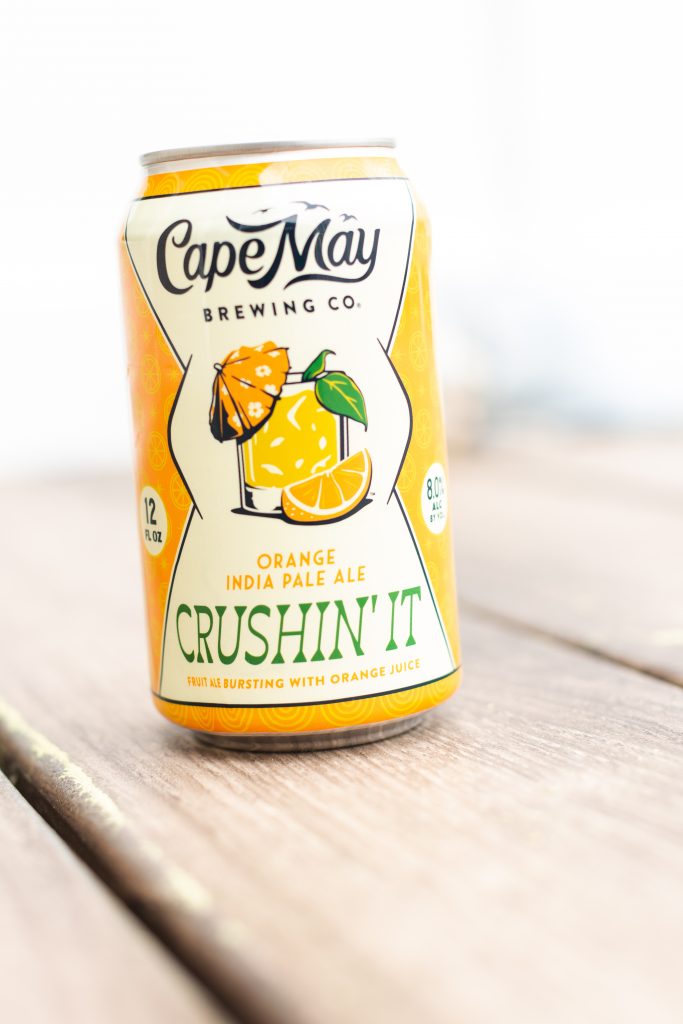 “It’s a well-worn joke around Cape May, but Crushin’ It absolutely crushed it the first few times we released it,” says Cape May Brewing Company CEO Ryan Krill. “When we released it toward the end of the summer of 2018, it was an instant hit. We brought it back in the summer of 2019 and couldn’t keep it on the shelves. Releasing this amazing Orange IPA for distribution is a no-brainer. I hope our fans are as excited about it as we are.”

Originally conceived to mimic the experience of drinking an Orange Crush — a beach-bar staple cocktail made with orange juice, vodka, orange liqueur, triple sec, and a splash of lemon-lime soda –, Crushin’ It’s blend of Citra, Mosaic, and Azacca hops were specifically selected to accentuate the fresh flavors of the copious amounts of orange juice.

“Crushin’ It is such a unique and delicious offering,” says Cape May Brewing Company Innovation Director Brian Hink. “It has a perfect balance point between a cocktail, beer, IPA, fruit beer, breakfast juice — it’s got that ‘It Factor’ that keeps you wanting to go back to it again and again.”

Crushin’ It began its journey as the winner of one of Cape May Brewing Company’s internal homebrewing competitions, originally designed by Hink.

“It’s crazy to think that a five-gallon batch of beer that I brewed in my kitchen as part of one of our company homebrew contests was scaled up to a fifteen-barrel batch here, then a thirty-barrel batch, and now is scaling up for a 500-barrel release,” he says.
As part of Cape May Brewing Company’s summer campaign, Crushin’ It is an excellent addition to the brewery’s lineup of beers.

“We have spectacular summer offerings with our cranberry shandy, The Bog, and our lager with sea salt and lime, Tan Limes,” says Cape May Brewing Company Director of Sales Bill Zaninelli. “Crushin’ It adds a refreshing splash of orange to our lineup of fruit-forward summer beers.”

At 8% ABV, Crushin’ It is deceptively easy-drinking. Dry, approachable, and well-balanced, the smooth flavors of orange juice help this brew go down easily.

“If you crush some on beach days,” jokes Zaninelli, “please make the lifeguards aware if you decide to go into the ocean!”

Originally canned in a 16-ounce package in 2018, Crushin’ It was released in its new 12-ounce format the following summer.

“The can design for this beer really says it all,” says Cape May Brewing Company Marketing Director Alicia Grasso. “A refreshing rocks glass of Orange Crush is the focal point, and an inviting wedge of orange lets our consumers know that we’re devoted to the freshness of Crushin’ It. Topped off with a drink umbrella, you immediately know that you’re destined for something tropical and refreshing.”

This past autumn, the brewery released a grapefruit version of Crushin’ It to their Tasting Room, and other variants are planned for this summer.

“As you’re likely to find variations on the fruits used in the Crush-style cocktails at beach bars from Cape Henlopen to Sandy Hook,” says Grasso, “we’re able to reflect that with innovations to the fruits used in this brand. Fittingly, with Cape May Brewing Company’s commitment to variety, Crushin’ It offers us almost limitless possibilities.”

Crushin’ It is available now for growler fills at the Cape May Brewing Company Brewtique at 1288 Hornet Road in the Cape May Airport and releases in cans on April 8th throughout New Jersey, with Eastern Pennsylvania and Delaware distribution to follow.

About Cape May Brewing Company:
CMBC started in 2011, with three guys making one beer in a 1,500 square-foot space. Now, they’ve got over 32,000 square feet of space at the Cape May Airport and several hundred flagship, seasonal, and small-batch brews under their umbrella, distributed throughout all of New Jersey and Eastern Pennsylvania. Their original space is now dedicated to experimental brewing and their award-winning Tasting Room, with a separate, industrial brewing facility across the street.

Other Half Brewing: All Together Beer Worldwide Collaboration Perrin Brewing Transitions No Rules Day to Online Order Format