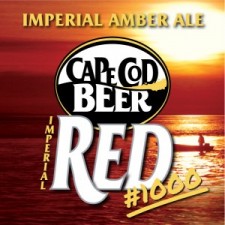 From Cape Cod Beer – We’re proud to announce our 1,000th batch!  A big round number like #1000 required something special, and given that Cape Cod Red, our flagship amber ale, accounts for 50% of the beer we sell, we thought a tribute to the Red might be fun.

This Imperial Red Ale was made with exactly 1,000 pounds of malted grains, a blend that included Canadian Pale, German Viena, and English Wheat, Crystal and Black Malts, along with a blend of 6 different hops: Cascade, Chinook, Magnum, Mt Hood, Zythos & Willamette.   This beer tops out at 8% alcohol by volume, coincidently, that’s 1 percentage point for each year that Cape Cod Beer has been in business.  This well balanced Imperial Red finishes with a lingering warmth from the higher alcohol content – perfect for the cool spring nights.