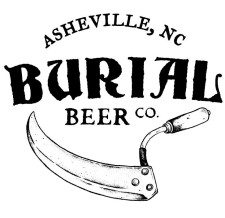 (Asheville, NC) – Burial Beer Co. will launch the New York market beginning Tuesday, January 17th with events around the Manhattan and Brooklyn areas. The brewery has maintained a long-standing relationship with the Craft Specialty Departments of Union Beer who they have named as their distributor. Due to ties to the city, via Jess Reiser who grew up in Brooklyn, New York was the clear choice for Burial’s next market expansion.

“Despite the, sometimes daunting, size of New York City, it is my home, explains Jess Reiser, co-owner and Head of Sales. “It is where I grew up, my roots are there and I couldn’t be happier to be bringing our passion home. ”

Expansion into New York marks the achievement of a three-part goal the three co-owners have maintained since inception: to send Burial beers to their hometowns and to communities where they feel connections with other industry members and craft enthusiast.

“Community and connections to our retailers, beer lovers, and fellow industry members, is the heart and soul of Burial,” states Reiser. “It is why we opened the brewery in the first place (that and our undying love of craft beer).”

The brewery has selected Union Beer as their distributing partner for New York and Hudson Valley.

“Union Beer is thrilled to help introduce Burial Beer Co. from Asheville, NC to the ever growing beer scene in NYC and the Hudson Valley,” states Mike Naclerio, Sales Manager of the Specialty Division. “We’ve long been fans of not just their great beer but also the incredible brand they’ve built through their artwork and vision.”

Burial Beer Co. is partnering with Three’s Brewing, Transmitter Brewing, and Other Half Brewing to host events from Tuesday, January 17th – Friday, January 20th Haymaker, Torst, The Proletariat, and Three’s Brewing to herald their presence in the North East market. The full list of events, dates, times, and locations is as follows:

ABOUT BURIAL BEER CO.
Founded in June 2013, Burial Beer Co. crafts Belgian-inspired ales, and bold American styles with a dedication to creativity, tradition, modernization, and preservation. Residing in and
revitalizing the South Slope District of Asheville, NC, the brewery began its life as a one-barrel system that grew to a ten-barrel In just over a year. Fall 2016 brought a new wave of
expansion and revitalization as Burial Beer Co. expanded again to a second location, the “Forestry Camp.” This location will be home to a twenty-barrel production brewery, urban farm, locally purveyed restaurant and two-story craft beer bar in South Asheville. The Brewery currently distributes to North Carolina, Georgia, and New York.