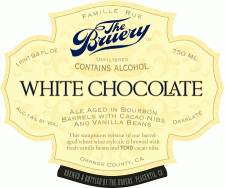 A few days after the thread on BeerAdvocate, Patrick Rue made note that The Bruery is taking this matter seriously, and are pulling White Chocolate from the shelves and e-shelves for further inspection.

We’ve stopped selling bottled White Chocolate on TheBrueryStore.com and our Tasting Room until we have a better idea about what’s going on. We haven’t yet experienced a sour bottle of this, but we don’t want to continue selling until we know the beer is up to our quality standards. It’ll take awhile to sort this all out, so it’ll probably be mid-September before we’re able to put bottles back up for sale.

Thanks,
Patrick
The Bruery

It’s a great showing by the Bruery to take this seriously. There are some artisan breweries that package and sell barrel aged beers with more of an “at your own risk” approach.  Usually I would be a little skeptical of message boards jumping on a beer being infected, but there were some actual pictures and experiences being shared with some real die hard Bruery fans in that thread, so my suspicion of shenanigans are lower than usual.