(Orlando, FL) – On April 27th Broken Strings Brewery in downtown Orlando will release Mr. Wendal, an 11% vanilla hazelnut bourbon-cognac barrel-aged imperial stout. Mr. Wendal is named after a song by the famous hip hop collective Arrested Development and $2 of every bottle of this collaboration will be donated to the Coalition for the Homeless of Central Florida. 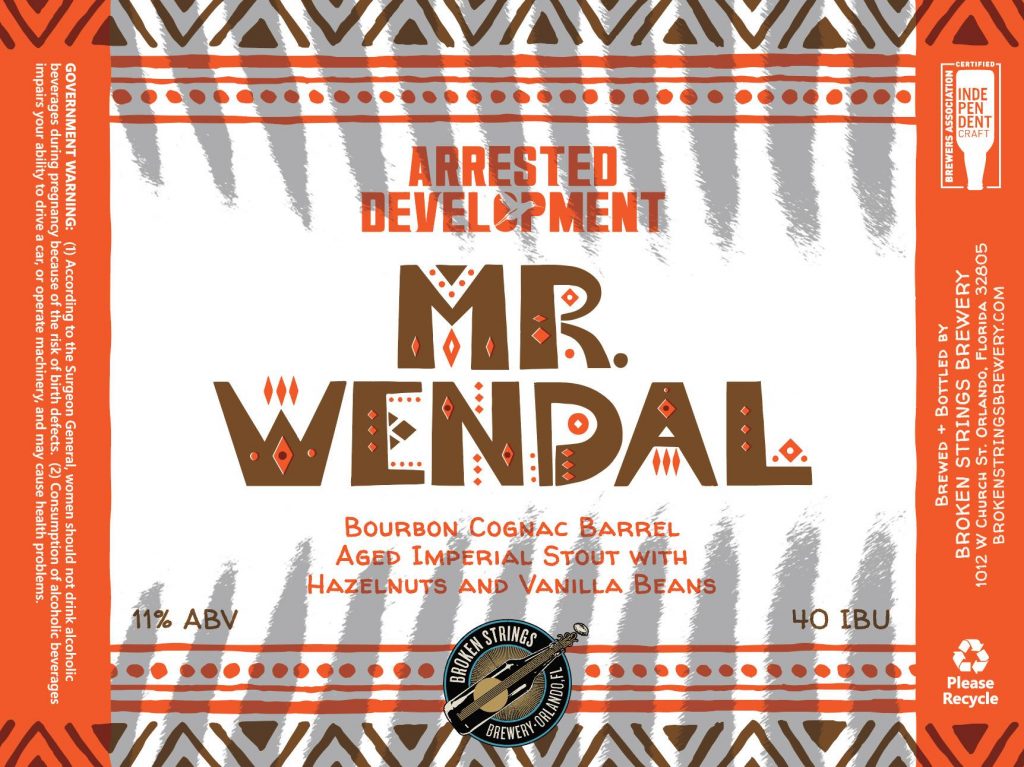 Central Florida’s Coalition for the Homeless serves more than 600 Orlando locals each day through residential programs and community initiatives. Their mission is to “transform the lives of homeless men, women, and children by providing crucial services to end their crisis of homelessness.” The song Mr. Wendal advocates helping the homeless and begins with “Here, have a dollar. In fact, no brotherman here, have two. Two dollars means a snack for me but it means a big deal to you.”

Arrested Development is a two-time Grammy award-winning hip hop group that was popularized in the early ’90s. Their positive alternative rap shook up the hip hop scene and Arrested Development was even named Rolling Stone’s Band of the Year in 1993. Their messages about helping your neighbor was an inspiration for the collaboration. Broken Strings Brewery is located just a half a mile from the Coalition for the Homeless community shelter.

Broken Strings Brewery is an Orlando microbrewery located at 1012 W. Church St. The company loves to craft unique beers with a story. For example, Mr. Wendal was aged for seven months in a barrel that had spent three years aging Maker’s Mark Bourbon before it was shipped to France where it was used to craft VSOP Cognac. The soft notes of oak, bourbon, and brandy harmonize with the flavors of hazelnut and vanilla without overpowering the roasty malt backbone of the high octane imperial stout.

Broken Strings Brewery often collaborates with local and national musical acts. This locally owned and operated Florida small business will celebrate its three year anniversary in early June and has received recent media attention for their beer Liquid Vinyl. This black IPA took home a gold medal at the 2019 Best Florida Beer competition and received an honorable mention for Best Beer in Florida.

For event updates check out the release’s Facebook event page.