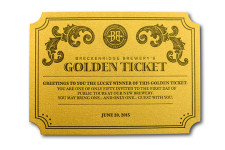 Denver, CO – This week Breckenridge Brewery slipped Golden Tickets into the hands of Colorado front range liquor stores and drinking establishments which they will use in special giveaway events leading up to the brewery’s highly anticipated opening in June. Golden Ticket winners will be the first public visitors allowed behind the scenes of the new $36 million brewery in Littleton on a special day devoted just to them. Saturday, June 20th, is the day for lucky Golden Ticket holders to come to the brewery for the first official tours, the first public tapping in the brewery’s tasting room, gifts from the brewery, and bragging rights. Only fifty Golden Tickets have been printed and there will be no more, so the day promises exclusivity and indulgence for ticket winners who are allowed one guest each.

“Our Golden Tickets are clearly a nod to Willy Wonka,” explains Todd Thibault, Breckenridge Brewery Culture Czar. “This brewery’s been three years in the making, and it’s like the coolest candy factory to us. We’re excited to show it off.”

The brewery was designed with a hybrid of European brewery and Colorado ranch influences. Barn-shaped buildings open to high ceilings, dormer windows and plenty of woodwork that lend a handcrafted, warm feel. After gathering for samples in the tasting room, tours will climb to the tile mezzanine overlooking the brewhouse. Its stainless tanks offer glimpses inside the brewing process, and views out of the windows behind the tanks reveal the Rocky Mountains to the west. Visitors then cross a bridge between buildings from brewhouse to fermentation to see where traditional and barrel-aged conditioning take place. They finish overlooking the packaging hall to observe delicious beer in its glory being prepared for delivery to thirsty people across the country. 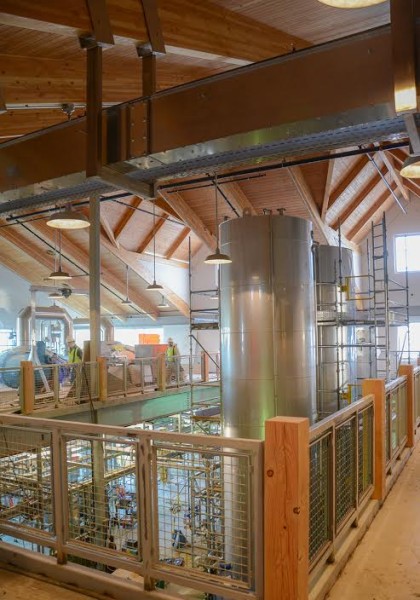 “Being first at anything is great,” continues Thibault. “We hope our Golden Tickets give fifty people something to brag about, but most importantly, we just want to treat some folks to a really, really special experience.”

Want to Win a Golden Ticket? Opportunities to “enter to win” just kicked off at liquor stores with most drawings taking place on June 6. Bars and restaurants begin hosting giveaway events this week and weekend. For the list of participating establishments with event dates and details, go to http://www.breckbrew.com/blog/win-a-golden-ticket-to-our-new-brewery.

Standard tours begin on Father’s Day, the day after the brewery’s Golden Ticket tours. Beginning mid-June, reservations will be taken on-line and by calling the brewery or its Farm House restaurant. Check http://www.breckbrew.com/about/tours for more information.