(Denver, CO) –  Breckenridge Brewery expands its barrel-aged offerings with the nation-wide release of Barrel Aged 72 Imperial in 22oz bottles. For the first time, the Colorado brewery will package one of its specialty barrel-aged beers in large format and ship it to all 37 states that it distributes in. 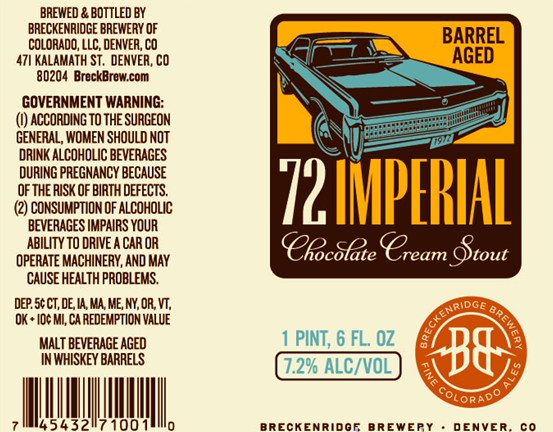 This unique release is a whiskey barrel-aged take on the brewery’s Small Batch 72 Imperial, an imperial chocolate cream stout. For every 100 bbl. batch, 400 lbs. of Rocky Mountain Chocolate Factory lustrous chocolate, made especially for 72 Imperial, are added to the brew. After spending a considerable amount of time in whiskey-soaked oak barrels, the finished product is molasses in color and smells of chocolate, wood, and whiskey harmoniously blended together. The beer has a dense and decadent mouthfeel and an abundance of rich flavors, including hints of sherry and dark fruit that compliment the toasted chocolate and oak notes remarkably.

Barrel Aged 72 Imperial is the first of many large format, barrel-aged beers that Breckenridge Brewery will release on a national scale. The company’s new brewing and production facility, slated to be operational in April of 2015, will house a 2000 sq. ft. cellar room for barrel-aging beers.

“It’s very exciting that we’ll have the ability to produce these unique, one-off beers at a significantly larger scale,” remarks Todd Usry, Brewmaster and Director of Brewing Operations at Breckenridge Brewery. “Until now, distribution of our barrel-aged varieties has been mostly limited to our home market due to capacity constraints. With the features in place at our new brewery, we’re going to be able to share these notable releases with consumers across the country.”

Breckenridge Brewery was founded in 1990 in Breckenridge, Colorado. In the past two decades Breckenridge Brewery has grown from a small 3,000-barrels-a-year brewpub to one of the most successful craft beer and restaurant companies in the nation. It now handcrafts more than 62,000 barrels of fresh beer annually and owns and operates six brewpubs and ale houses in the state of Colorado. For more information visit www.breckbrew.com.