(Portland, OR) – Breakside Brewery, known for its innovative, experimental and diverse beers, has added “Thirst Trap” to its IPA series. This rich brew boasts a flavor and aroma profile that is at once surprising and entirely perfect, which can best be described as “Christmas in the tropics.” 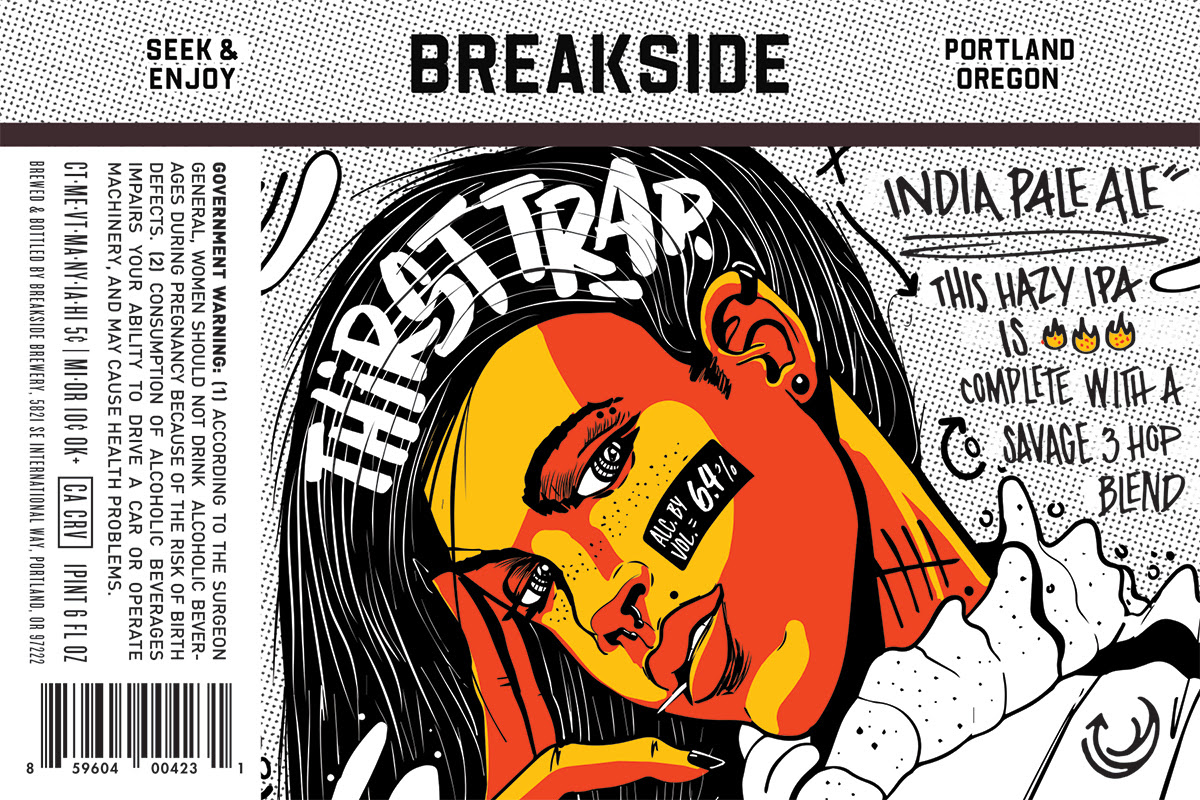 “Thirst Trap continues our exploration of the far reaches of the world of hazy and juicy IPAs. What excites me about this particular beer is the way that it combines some hops that some brewers have written off as old school– Chinook, specifically– and really highlights just how contemporary a profile it really has,” said Ben Edmunds, brewmaster for Breakside Brewery.

He continued, “Chinook has these huge grapefruit notes, and when you pair it with Mosaic and Simcoe, it becomes a real symphony of hop flavor. In some ways, this is like West Coast IPA gone east….kind of like what would happen if Breakside IPA, Wanderlust, and What Rough Beast had a kid sister that was way cooler than all of them.”

Thirst Trap is a study in balance. It combines the iconic complexity of the Mosaic hop with a generous helping of grapefruit-aroma-laden Simcoe and Chinook hops. This intricate aroma profile is balanced with a blend of four malts, including Two Row, Flaked Wheat, Munich and Light Crystal. Breakside brewers brought all these ingredients together to create a beer that has big notes of ruby red grapefruit, citrus zest and pine needles, paired with aromas reminiscent of guava, Sauvignon Blanc grapes, pineapple and mango. ABV: 6.4% / IBUs: 69

Released in limited quantity just for three months of the year, Thirst Trap is brewed in small batches and will be extremely fresh until it disappears completely in mid-fall. With no fewer than three pub locations in the greater Portland area, Breakside’s culinary team is always thinking ahead to provide the perfect pairings for each release coming out of the brewhouse. Thirst Trap is flexible with food pairing options that run the gamut from seared flat iron steak with whipped potatoes to pan fried trout with kale Caesar salad.

Look for one more creation coming up in the Breakside Rotating IPA Series before the end of this year, along with about 15 further limited and series releases ranging from IPAs to barrel-aged rarities.

About Breakside Brewery
Breakside Brewery opened in 2010 in Northeast Portland as a restaurant and pub brewery. The brewery is known for its innovative, experimental and diverse beers. In 2013, Breakside expanded operations to Milwaukie, OR with a 30 bbl production brewery filled with 30, 60 and 120 barrel tanks, barrel rooms for wild and non-wild/sour fermentations, a high-speed bottling line and a 24-tap tasting room. The brewery expanded to Northern California in 2016 and in 2017 Breakside opened its third location in the Slabtown district of Northwest Portland. In addition to winning several national and regional awards for its beers, Breakside was named Brewery of the Year at the 2017 Oregon Beer Awards and the 2017 Best of Craft Beer Awards. Breakside sells on draft and in 22oz bottles in Oregon, Washington, Hawaii, Arizona, Colorado, Idaho, North Carolina, South Carolina, Massachusetts, New York, Vermont, Maine, Northern California, British Columbia and Alberta. www.breakside.com