(Portland & Milwaukie, Oregon)-  Breakside Brewery has a new barrel-aged beer up their sleeves called Bon Vivant, the latest in the rare limited edition reserve bottlings. This latest creation is a Dry-Hopped Belgian Golden Ale aged in barrels previously filled with Pinot Noir to yield a beer full of pungent fruity hop flavor and aroma and notes of Belgian and wild funky yeasts, cherry, oak and cola. Bon Vivant will begin shipping to retailers this week in Oregon, Washington and Colorado with 22oz bottles for $13 each and just a few kegs for Breakside’s taproom and brewpub. 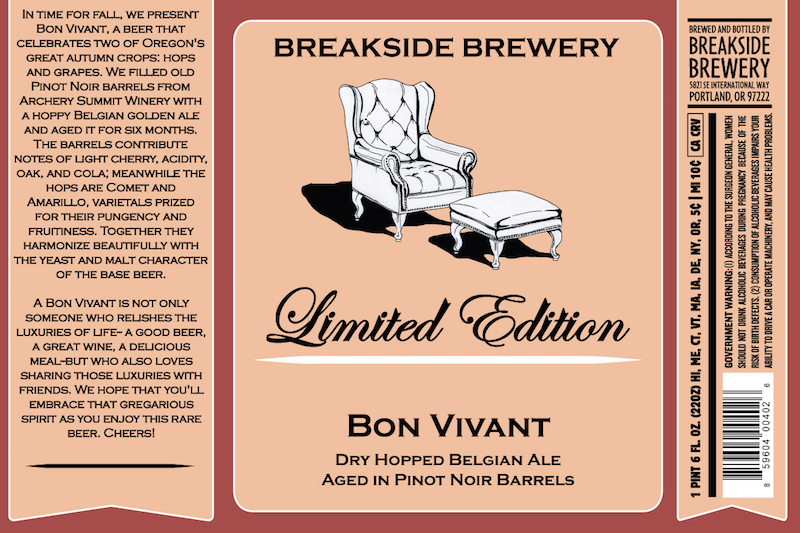 In time for fall, we present Bon Vivant, a beer that celebrates

two of Oregon’s great autumn crops: hops and grapes. We filled old Pinot Noir barrels from Archery Summit Winery with a hoppy Belgian golden ale and aged it for six months. The barrels contribute notes of light cherry, acidity, oak, and cola; mean- while the hops are Comet and Amarillo, varietals prized for their pungency and fruitiness. Together they harmonize beautifully with the yeast and malt character of the base beer.

A Bon Vivant is not only someone who relishes the luxuries of life– a good beer, a great wine, a delicious meal–but who also loves sharing those luxuries with friends. We hope that you’ll embrace that gregarious spirit as you enjoy this rare beer. Cheers!

Opened in 2010 in the quiet Woodlawn neighborhood of Northeast Portland as a restaurant and nano-sized brewery, Breakside expanded to a 3.5 BBL brewhouse while winning their first medal at the Great American Beer Festival in 2011 where they have earned medals each year since. In late 2013 the brewery expanded operations to Milwaukie, Oregon with a 30BBL production brewery filled with 60 and 120BBL tanks, barrel rooms for wild and non-wild/sour fermentation’s and a 20 tap tasting room. In 2014 Breakside was awarded with the highly coveted Gold Medal for American-style IPA at the Great American Beer Festival for their flagship IPA that was also named to Men’s Journals 100 Best Beers In The World and Sip Northwest’s Best IPA in the Northwest. Breakside is also known for their experimental, barrel-aged and sour beers like Bourbon Barrel-Aged Aztec a strong amber ale with chocolate and chilies that won Bronze at both Chicago’s Festival of Barrel-Aged Beers and Best of Craft Beer Awards and Passionfruit Sour a berliner-weisse style beer that earned a Bronze at the 2013 GABF.