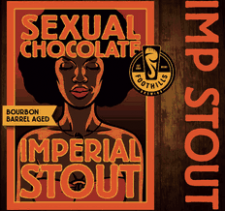 The rumors are true: our world famous Bourbon Barrel Aged Sexual Chocolate is returning this weekend!

For those of you new to our beer, the Sexual Chocolate is an award-winning Russian Imperial Stout infused with organic cocoa nibs.  Deep opaque black in color, it offers notes of espresso, blackstrap molasses, toffee, and dark fruits that serve to mask an alcohol content approaching ten percent.  Aging in rare Pappy Van Winkle bourbon barrels takes the Sexual Chocolate to a whole new level, adding notes of oak, vanilla, and, of course, bourbon.

Come in Friday night after 6pm to try the 2012 edition on draft; bottles go on sale at 10am the following morning.  As with past bottle releases, we do encourage you to arrive early to wait in line– there is a limit of four bottles per person, but supplies are still limited, and we cannot guarantee or reserve bottles for anyone.