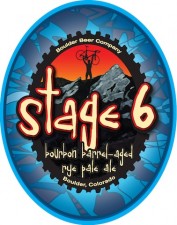 Stage 6 is an extremely small batch brew currently aging in two oak bourbon barrels.  It was brewed with caramel malt and toasted rye in the mash tun for a nutty flavor and deep golden color, delicately hopped, then racked into bourbon barrels to age for over two months.  The barrel-aging will impart vanilla, oak and bourbon flavors and aromas into the beer for great complexity.  It will be offered on draught only to a handful of local key accounts to serve on August 25th during the exciting sixth stage of professional cycling.

As Colorado’s First Microbrewery, Boulder Beer Company wanted to celebrate the fact that their hometown is the birthplace of professional cycling races as well as the oldest craft brewery in the state.  Boulder’s iconic Flatirons will be the backdrop to the epic Stage 6 on August 25th and also majestically loom in the background of Boulder Beer’s original logo and artwork.

Boulder Beer’s connection to the cycling community extends to their sponsorships of the Boulder Cup of Cyclocross, the Boulder Roubaix, the Boulder Mountainbike Alliance, Outdoor Divas Cycling Club, RealD-Amgen Master Cycling Team, the Boulder Cycling Club and the Denver Bike from Work Bash on Bike to Work Day.  They were also the first business in Boulder to adopt a portion of a city bike path, maintaining a section of the Goose Creek Greenway Trail that runs behind the brewery, keeping it clean and safe for cyclists and pedestrians.  Additionally, the brewery provides Eco Passes for all employees, allowing them to ride the city and regional buses and light rail for free, encouraging alternative transportation.