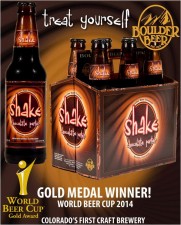 The Brewers Association World Beer Cup is a global competition that evaluates beers from around the world and recognizes the most outstanding beers produced today. The competition is judged by an elite international panel of judges and is held every two years. The 2014 competition saw 4,754 entries from 58 countries – a 21 percent increase in the number of entries from the 2012 World Beer Cup, which had 3,921 entries, proving again that it is the world’s largest and most diverse international beer competition for commercial breweries.

“Brewers all over the world participate in order to win recognition for their creativity and brewing ability,” said Charlie Papazian, president of the Brewers Association, the US-based trade association that has put on the competition every two years since 1996. “For a brewer, a World Beer Cup gold award allows them to say that their winning beer represents the best of that beer style in the world.” The World Beer Cup, often referred to as “The Olympics of Beer Competition,” is the most prestigious beer competition in the world.

Dark black in color with rich, sweet aromatics and flavors of dark chocolate, coffee and caramel, Shake Chocolate Porter was added to our year round line up in September 2013. This unique brew blends five different grains, including Chocolate Wheat, that along with cacao nibs create a devilishly delicious chocolate finish with a velvety mouthfeel.

Shake Chocolate Porter is available all year in Colorado, and the other 34 states where Boulder Beer can be obtained. More information on distribution areas can be found at www.boulderbeer.com.