(Fullerton,CA) – It is our absolute pleasure to announce that Robert Margalis, former Lead Brewer, has been promoted to Head Brewer of Bootlegger’s Brewery. 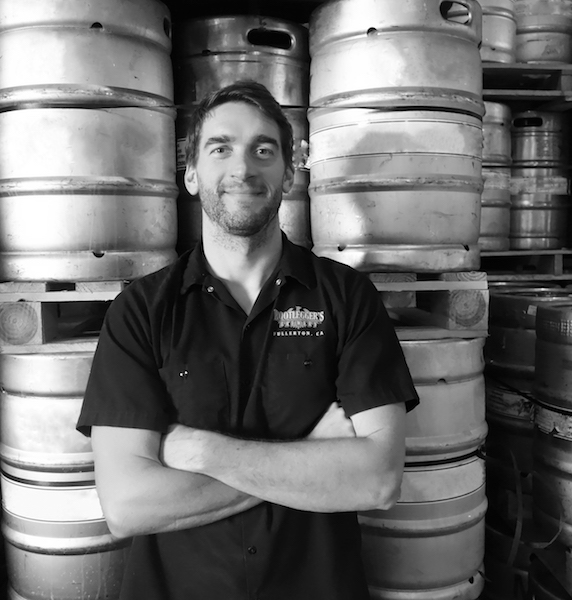 Robert started with us 3 years ago coming fresh off the US Swim Team as an internationally ranked swimmer. His began his Bootlegger’s career with packaging and keg cleaning and has worked his way through every job on our production team from cellar work to wort production. In June 2015, Robert was promoted to Lead Brewer and was instrumental in scaling up our recipes from our old 7-barrel brewhouse to our new 30-barrel brewhouse. He has also proven himself as a consistent leader on our production team, always willing to jump in and help get things done when needed.

“Robert has shown continued dedication and leadership throughout his time at Bootlegger’s Brewery. I’m confident that I have finally found the right person to pass the torch of Head Brewer to. Robert’s promotion will allow me to hand off day-to-day production responsibilities so that I can spend more time focused on new strat- egies to address the increasingly competitive market.” – Aaron Barkenhagen, Founder & CEO

As Head Brewer, he will have ultimate responsibility for the consistency and quality of our beers, management of all production employees and budgets, and leadership the new development of beers. He will also be out and about mingling at events representing the company and sharing his knowledge to fellow beer lovers. We look forward to the continuous hard work Robert has given to Bootlegger’s Brewery along with the new and exciting developments for the company.

Family owned and operated for over 7 years, Bootlegger’s Brewery grew from a one man operation to over 10,000 award winning barrels per year. We brew a wide array of styles including the local favorite, Knuckle Sandwich DIPA. We also proudly brew seven other year round beers along with many rotating limited releases. Based in Fullerton, California, Bootlegger’s Brewery provides its locals with a range of options to find our beer, including our Tasting Room in downtown Fullerton and nearly 3,000 bars, restaurants, convenience stores, and grocery stores throughout Southern California. For more information visit: www.bootleggersbrewery.com