(Greenville, SC) – During the turmoil of COVD-19 many have suffered and lost much. Simultaneously, both individuals and businesses alike have been able to find silver linings. One of those linings was the forced opportunity for Birds Fly South Ale Project in Greenville to have additional time to focus on creating a new type of beer release. No Soft Goodbyes, an Imperial Milk Chocolate Stout (available in 16oz cans, 4-packs) will be available for both online pre-sale on July 2nd, as well as purchase and pick-up on July 9th at the brewery’s taproom. Created to be shareable, the bold 4-pack includes 4 variants of the beer (German chocolate cake, mocha, peanut butter, and the base beer). 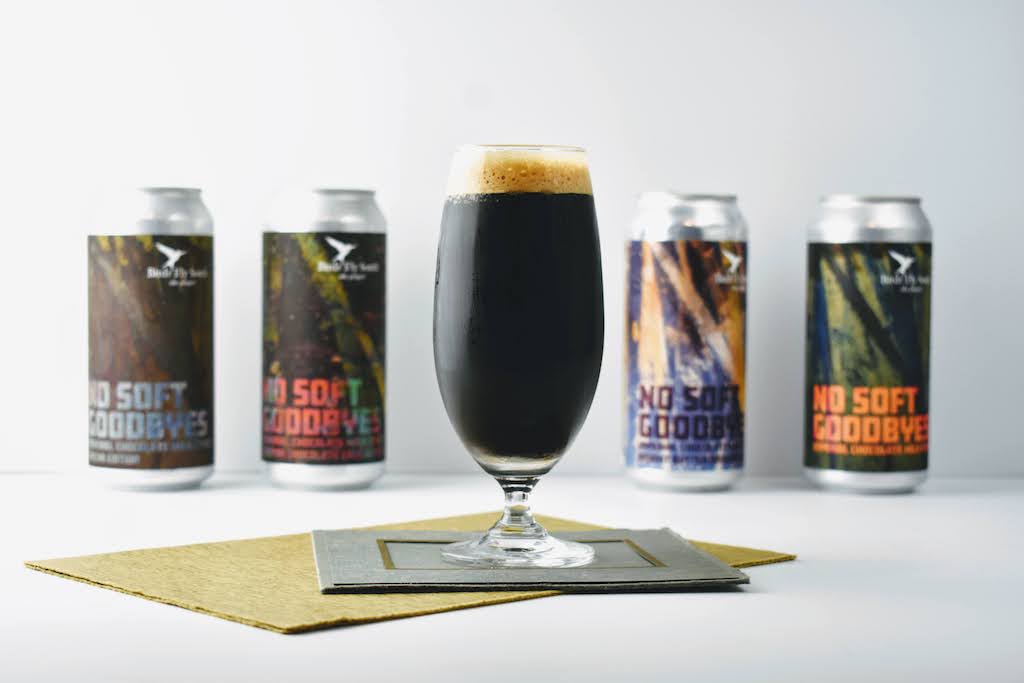 Like many breweries across the world, Birds found themselves with extra tank space and time. Although it was not a situation anyone wished for, it created some additional bandwidth for them to be creative/innovative. “We don’t typically produce a lot of stouts as a brewery,” noted owner and header brewer Shawn Johnson, “but we found ourselves with extra time to experiment and do some unique things, such as brew a big stout. I had also never made a beer with peanut butter before, so I wanted to give that a try, which inspired one of the stout variants.” The beer as a whole took a lengthy 27 hours to make between the mash and the brew process. It paid off by producing a big, bold, flavorful Imperial Milk Chocolate Stout.

“We also wanted to have something with variety that folks could grab and share with family and close friends during this time of quarantine, so we created some variants of the beer and dubbed it the “friend pack.” Since the beer’s ABV is 15.2%, it lends more to opening a can and tasting and sharing, which is also where the intentionality of the flavor variant comes in. The mixed 4-pack provides a great excuse for folks to taste, share, and discuss the assorted flavors from the same base beer. The brewery even partnered with local coffer roaster, Due South, for the coffee infused mocha variant included in the 4-pack.

More Background on the Beer

The name, No Soft Goodbyes, comes from a band that one of their brewers’, Brett Terrapin, performs in called WRVM. The beer’s name is a lyric straight from one of their songs on their recent LP they released. The brewery surprised Brett with the name by revealing the cans once they arrived with the lyrics featured on them. Much like WRVM’s music, this beer is bold and loud and meant to be shared.

These 16oz can 4-packs will be available at Birds Fly South Ale Project in Greenville, SC for pre-sale starting on July 2nd with an official release date of 7/9/20. Ten cases will be available for purchase of this chewy rich stout will. Individuals can pre-order and schedule curbside pick-up via the brewery’s online store. All the details for this event and release can be found on at https://bfsbeer.com/events/