Avery Quinquepartite – The Rarest Brew To Date in Barrel-Aged Series 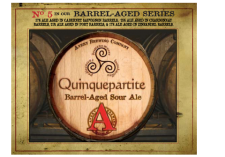 Latin for “consisting of five parts”, Quinquepartite was blended from beers aged in five of the best oak barrels in the Avery cellars: two Cabernet Sauvignon barrels, along with one each of Port, Chardonnay and Zinfandel barrels.  The beer achieves a pungent balance, mingling the exotic aromas and flavors of brettanomyces wild yeast with a citric acid-like tartness.

Quinquepartite will release on Friday, August 6th from 6PM-9PM at the Avery Tap Room in Boulder.  Admission is free and attendees will have the opportunity to purchase up to 12 bottles each.  Additional bottles, in the unlikely event that some go unsold on Friday, will be sold exclusively from the Avery Tap Room.