(Boulder, CO)  — Avery Brewing Company, a Boulder-based craft brewery and maker of White Rascal Belgian-Style White Ale, is thrilled to announce the release of its Scotch barrel-aged stout named Islay. Adam and Larry Avery have Scottish roots, but it wasn’t until the brewery got its hands on some very rare Laphroaig Scotch barrels that this beer became a reality. This peaty stout is number 44 of Avery’s Barrel-Aging Series and will be available at the Boulder-based brewery starting on Sunday, April 23rd. With only 127 cases available, once it sells out, it is gone forever. Customers will be able to purchase two cases of Islay starting at 1:00pm. 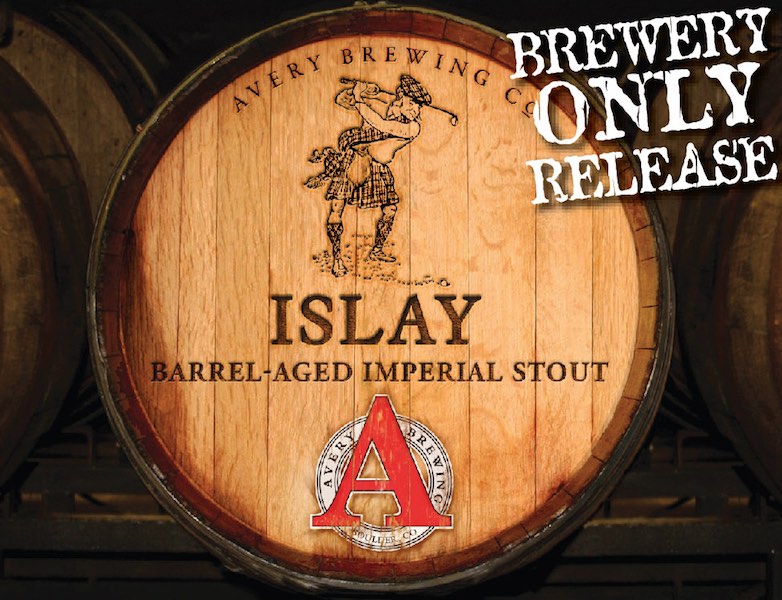 Islay is a delicious stout that delivers big on the quintessential peaty and roast flavors found in Laphroaig Scotch. Avery received its very first batch of Laphroaig barrels in November 2016 and quickly got to work experimenting with this aggressively flavorful barrel. Through experimentation, Avery determined that their Scotch barrels were so potent that the base beer only had to be aged for five weeks vs. the three to four months that are typically required when aging beer in other types of barrels. In addition, the typical roasted malt characteristics of a stout had to be mellowed and sweetened in order to compliment the strong peaty characters of the barrel. The result is still an extremely smoky stout, but one that is more precisely balanced.

“This is probably the rarest beer that we have ever done,” says Travis Rupp, Avery’s Research and Development Manager and Beer Archaeologist. “We wanted to make something that no one else is making and we had to experiment quite a bit to come up with the flavor profile and recipe for Islay. It’s underlying rich sweetness compliments the aggressive, scrappy, and peaty characters of the Laphroaig barrels in such an interesting way. We were not afraid to go big with this beer and I think beer enthusiasts are going to go crazy because you cannot find anything like this in the market”.

“If you’re not a fan of peaty Scotches,” says Andy Parker, Chief Barrel Herder at Avery, “you might want to look elsewhere. If you are, there’s a good chance you’ll taste it and imagine that you’re in a peat bog in Scotland. Filled with chocolate malt. And copious vanilla. And unicorns”.

The name, Islay (pronounced EYE-LA) was inspired by the birthplace of the Laphroaig barrels, which hail from an island off the coast of Scotland called Islay.