(Boulder, CO)— Avery Brewing Company, a Boulder-based craft brewery and maker of White Rascal Belgian-Style White Ale, is thrilled to announce the release of its bourbon barrel-aged Coconut Porter. This is beer that has been a few years in the making. It was on the calendar to be released in early 2016, but Avery Brewing decided to hold the release until the beer was perfect. After over a year of making small tweaks, specifically regarding the way the coconut is infused into the beer, it is finally ready to be shared with the fervent fans who have been clamoring for it. 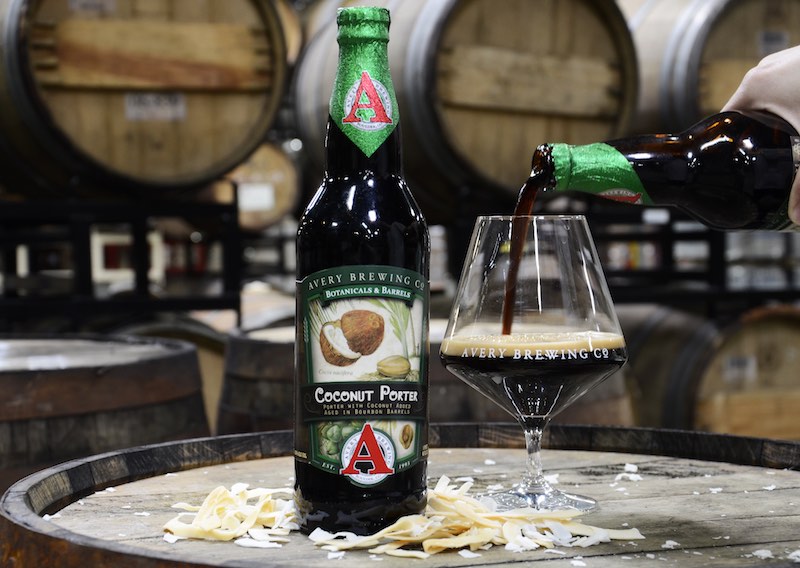 Given that hype, Avery Brewing Co. is celebrating its bottle release on April 7th at the brewery. It will roll out nationally in the weeks to follow.

This rich and balanced porter is the fifth installment of Avery Brewing’s “Botanicals & Barrels” series that also includes Raspberry Sour, Vanilla Bean Stout, Tangerine Quadruple Ale, and Apricot Sour. These beers have all been aged in oak barrels for at least three months and have the addition of one “botanical” ingredient outside the standard malted barley, hop, yeast, and water recipe. Coconut Porter uses real coconut flakes as its one additional ingredient which are roasted by our partner Spice of Life Catering Services in Boulder, CO, to ensure consistency and quality.

“Infusing coconut flavor into beer is very challenging at a production level,” says Andy Parker, Chief Barrel Herder at Avery. “We had great success with coconut porters in the past, such as Momi Hiwa and Dui Cochi, but we recently found a way to better dial in the amount of coconut flavor so it is consistent batch over batch. Our goal is to let all elements of the beer shine. There is substantial coconut flavor, but you don’t lose any of the richness of the porter or the bourbon oak characters from the barrels. It’s a fantastically balanced beer that we now can produce all year long.”

Coconut Porter will be available year-round in 22-ounce bottles and will be distributed nationally.