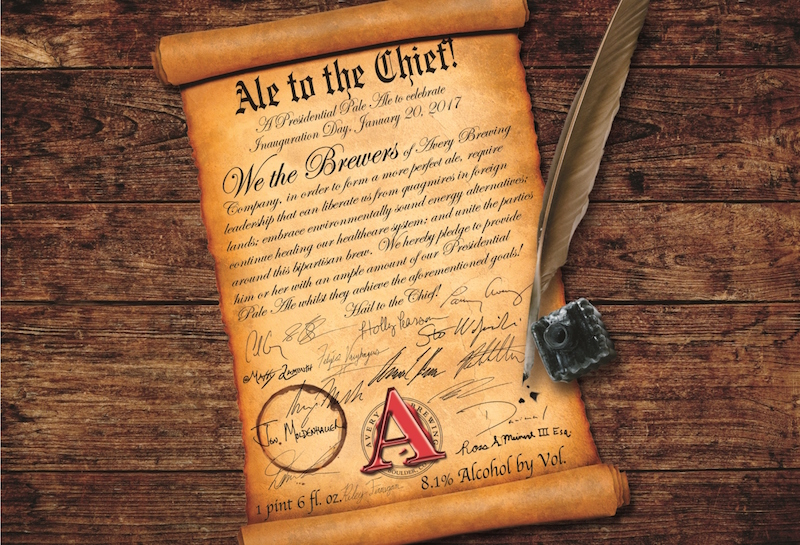 (Boulder, CO) — Originally brewed to celebrate Inauguration Day, January 20, 2009, Avery Brewing Company elected to give their beer Ale to the Chief a third term to commemorate the 2016 election. Rather than categorizing the beer as Imperial, Avery created a new beer style to honor our country’s democracy, calling the beer a Presidential Pale Ale. A brew worthy of the Oval Office!

We the Brewers of Avery Brewing Company, in order to form a more perfect ale, require leadership that can liberate us from quagmires in foreign lands; embrace environmentally sound energy alternatives; continue healing our healthcare system; and unite the parties around this bipartisan brew. We hereby pledge to provide him or her with an ample amount of our Presidential Pale Ale whilst they achieve the aforementioned goals!

Hail to the Chief!

All-American pale ales are typically brewed with a bipartisan blend of malt and hops, both of which Avery increased before dry-hopping with a quintessential American hop, Cascade. Though this hop varietal hails from Washington the state, it was nominated to lead this beer due to its floral and citrusy persona. The malts share the power, with Caramel-120 malt adding contributing caramel flavor and color, Honey Malt for honey-like sweetness, and Dark Munich Malt bringing biscuity notes to the table.

This 8.1% alc/vol beer will be sworn into the Avery draft list on Monday, July 18th at 3 o’clock MDT. After the brewery release, 22-ounce bottles will make their way around the country to AZ, CA, CO, FL, GA, IL, KS, KY, MA, MD, MN, NC, NY, OH, OK, PA, SC, TX, VA, WA, and WI. Citizens can find Ale to the Chief in their district by putting their zip code into the Avery Brew Finder at averybrewing.com/brew-finder.