(Boulder, CO) – Avery Brewing Company, a Boulder-based craft brewery and maker of White Rascal Belgian-Style White Ale is thrilled to announce the release of Tequilana, a tequila barrel-aged sour. It will be available on draft at the Boulder-based brewery on March 13th and will start to hit shelves across the nation throughout March. This beer is number 43 of Avery’s “Barrel-Aged Series,” which is made up of small-batch, highly experimental beers that are brewed only once. 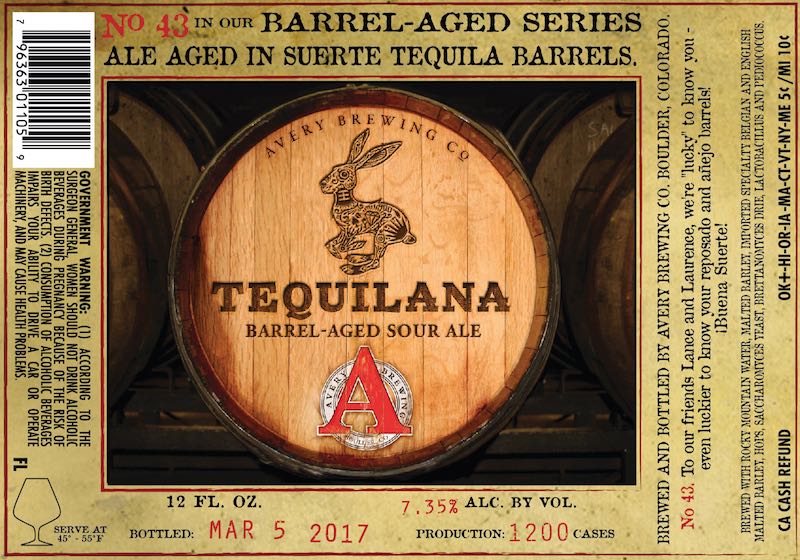 Tequilana is a light and lingering sour beer with a blast of tequila flavor. Travis Rupp, Avery’s Research and Development Manager and Beer Archaeologist, was thrilled with the amount of tequila that this beer imparts on the nose. “Tequilana,” said Rupp, “has a very pure and huge tequila character. Since this beer was aged in reposado and añejo tequila barrels for seven months, it’s really exciting to smell and taste oak character in the beer such as butterscotch, vanilla, and agave notes since they come simply from the barrels themselves.”

​Tequila barrels can be difficult to source, but Avery established a great relationship in 2013 with Suerte Tequila, whose headquarters are also in Boulder, CO. What began as an experiment has grown over the years, and Avery now has around 200 Suerte Tequila barrels on-site. To ensure that the barrels do not dry out during their long journey from Atotonilco El Alto, Mexico, Suerte adds some tequila back into the barrels before shipping to Avery. “We have gotten amazingly pronounced tequila character from Suerte’s barrels,” said Rupp, “that’s why we like working with them.”

True to the Barrel-Aged Series, Tequilana is inspired by the Latin scientific classification of the Blue Agave plant used in tequila production. Tequilana will be available nationally in 12-ounce bottles, but once it sells out, it’s gone forever.

About Avery Brewing Company:
Avery Brewing Company is a family-owned craft brewery in Boulder, Colorado. Since 1993, Avery has pioneered innovative beers by blending the art and science of brewing with ingenuity, creativity, and boldness. Avery bottles and cans more than 40 beers a year including White Rascal Belgian-Style White Ale, The Maharaja Imperial IPA, and Tweak. Craft your journey at averybrewing.com.