(JUNEAU, AK) – Thirty years ago, a young couple in Juneau, Alaska started a brewery — a common occurrence today. But back then, there were fewer than 100 breweries operating in the US and none in Alaska. Now, the Alaskan Brewing Company ranks 22 out of more than 4,300 craft breweries by volume. As a celebration of 30 years in the business, Alaskan is releasing a special 30th Anniversary Beer, Perseverance Ale. 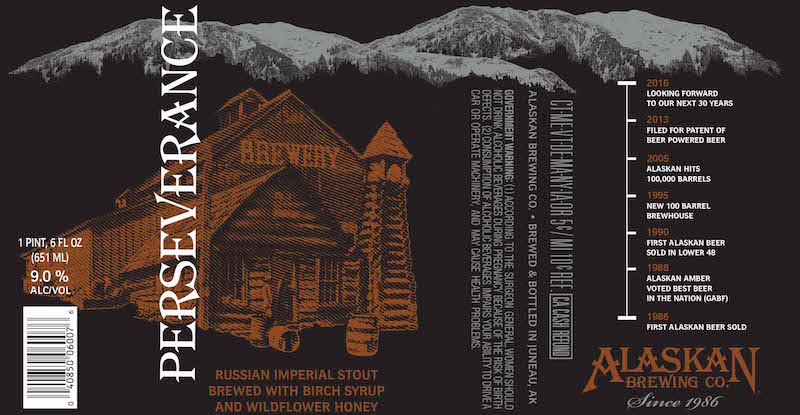 “A whole bunch of hard work, local know-how, cooperation, and perseverance went into the making of this brewery,” said co-Founder Marcy Larson. “So we thought Perseverance Ale – a Russian Imperial Stout with a lot of historical significance and local ingredients was a perfect beer to brew in celebration of our first 30 years.”

The style choice is a nod to Alaska’s rich Russian history, which “Seward’s Folly” officially ended on March 30, 1867, with the purchase of the vast territory in the name of the United States. Added to this traditional Russian Imperial Stout style are local ingredients Alaskan has become well known for, such as birch syrup and alder-smoked malts. The name refers to an ethic that has seen the brewery through many years of development, hardships and innovation. It is also a reference to the Perseverance Gold Mine, which operated in Juneau from 1912 to 1921. It was considered one of the most innovative mines, with a method of extracting gold that avoided many of the powerful chemicals used in other contemporary operations. For a time, it was the largest gold mine in the world.

Alaskan Brewing’s history is marked by innovation as well, not just as one of the pioneers and explorers of the craft brewing industry, but also through the use of local ingredients and breakthrough brewing methods.

“We have spent much of our time figuring out different ways of operating, because our remote location often did not let us conduct business as usual,” said co-Founder Geoff Larson. “Looking back now, we’ve realized that the challenge of brewing in Alaska has shaped us and made us who we are. After 30 years, it is the challenges that have made us stronger and more able to adapt as our business has needed to change. It’s been quite a ride!”

Larson says the fact that Alaska has been so much a part of the brewery’s identity is the reason that many of Alaskan’s beers reflect the state through the use of local ingredients, or by re-creating and reimagining historic brews. From adding spruce tips to flavor the iconic Winter Ale, to the use of alder-smoked malt in the highly regarded Alaskan Smoked Porter, and the re-creation of a 100-year-old recipe in Alaskan Amber, the brewery strives to reflect the best of the state in every beer it makes. The Larsons say that locally-based focus will remain a guiding principle for Alaskan Brewing for the next 30 years as well.

For more information, on the history of Alaskan Brewing, and on Perseverance Russian Imperial Stout, see www.alaskanbeer.com.