(JUNEAU, AK) – Alaskan Brewing Company this fall is nixing the pumpkin beers in favor of a rich coffee ale created by teaming up with Juneau-based Heritage Coffee Roasting Company. First released on a limited basis last year to rave reviews, Alaskan Heritage Coffee Brown Ale uses an unusual technique and the highest quality ingredients to bring out the best coffee flavor and aroma, and will be available as the autumn seasonal in all states where Alaskan Brewing is distributed. 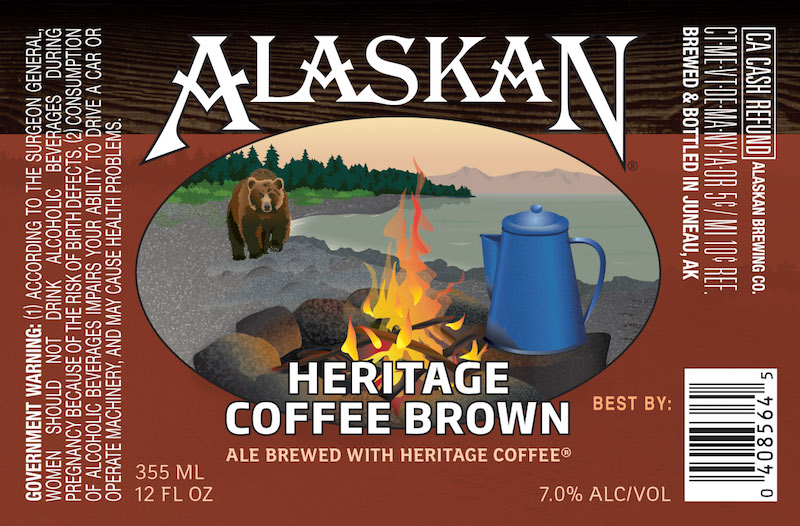 “We were looking to brew a coffee beer that wasn’t overly-dominated by dark malts,” said Alaskan Brewer Tyler Lindquist. “That’s why we went with a Brown Ale for this beer. The subtleness of the Brown Ale then allowed us to accentuate the richness of a great coffee, instead of the bitter acrid flavor that sometimes comes through in coffee beers”

That subtle flavor allowed for a radical technique that required close collaboration between the brewers at Alaskan and the roasters at Heritage.

“They wanted to have a deep coffee backbone to this beer, so we all came up with the idea of roasting some of the malt in our coffee roaster with some of the beans used in the beer,” said Heritage Coffee Roaster Mike Dunlevy. “That’s pretty tricky, because the flashpoint of malt is much lower than that for coffee beans, so the potential of fire was very real.”

Heritage Roasters worked with Alaskan Brewers to sample coffees in order to find a blend that would bring out chocolate, caramel and honey in the final beer. They decided on a Brazilian variety called Paixao, which they cold-brewed to reduce bitterness. This cold-brewed coffee was added at multiple stages throughout the brewing process of the beer, in order to infuse it with a deep and rich coffee flavor and aroma.

Alaskan has released pumpkin beers for the past few years during the fall season, but this year, among a seeming flood of pumpkin beers available on the market, Alaskan’s brewers wanted to break away from convention and offer an alternative to their loyal fans.

First sampled at last year’s Great American Beer Festival, Alaskan Heritage Coffee Brown Ale garnered rave reviews, with at least one reference to it being part of a “next level” of coffee beers. The beer will be out in September and will be available until mid-November.

For more information, check out Alaskan Brewing’s website at www.alaskanbeer.com.