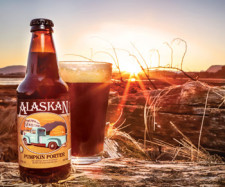 Juneau, AK – Alaskan Pumpkin Porter is the newest seasonal release from Juneau-based Alaskan Brewing Company, available in 12-oz bottles and on draft in the 17 states where the brewery now distributes. Introduced as a Pilot Series last year, response was so strong that a seasonal slot was a natural next step.

“We’ve been known for our Smoked Porter for years, so we built on that foundation to give a unique perspective on a pumpkin beer,” said Alaskan brewer Brent Kesey. “We wanted to give that great pumpkin pie flavor but not go overboard on sweetness, and that’s where the smoky flavor comes in.”

By using some of Alaskan’s famous alder wood-smoked malt in the brew, this pumpkin ale avoids a cloying taste and instead leaves a clean, slightly smoky aftertaste. The resulting robust, full-bodied porter also has a, frankly, crazy amount of pumpkin – over 11 pounds per barrel.

A native plant of North America, pumpkins were first used in beer in colonial America as a substitute for hard-to-find malt, and none other than the father of our country George Washington had a highly touted recipe.

The long daylight hours in the summer makes Alaska home to some of the world’s largest pumpkins. The pumpkin creates a smooth richness that provides some comfort while the Alaskan nights grow longer and colder. In addition to the pumpkin and smoked malt, brown sugar and holiday spices are added to create an aroma and flavor reminiscent of grandma’s pumpkin pie.

Alaskan Brewing’s take on this American tradition will be available through October of this year.

New Holland Brewing Announces New VP of Marketing Would You Believe What Prairie Artisan Ales Is Bringing to GABF?