(AUSTIN,TX) – Adelbert’s Brewery is excited to announce the release of Tripel Treat, a rum barrel aged tripel. Tripel Treat is the newest beer in our Vintage Series, a line of beers aged in barrels. To date, we have aged our ales in wine, whiskey, gin and now, rum barrels. 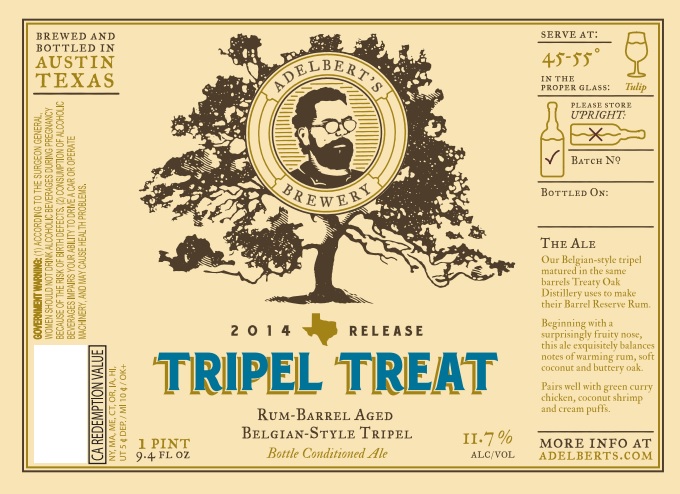 Tripel Treat is an 11.7% barrel aged beer, made by aging Adelbert’s Tripel B in Treaty Oak’s Barrel Reserve Rum barrels. This ale has an exquisite balance of warming rum notes, soft coconut and smooth oak, with a surprisingly fruity nose.

“I enjoy working with Treaty Oak’s barrels to make new and innovative combinations of barrel aged beers. In some ways, bourbon barrel aging has been overdone, so it’s nice to offer something unique to consumers,” Scott Hovey, Founder of Adelbert’s Brewery stated. “We were excited to find that the Rum barrels really made the vanilla notes pop in ways that other barrels don’t. This beer has a complexity you’ll want to explore.”

Tripel Treat will hit the market in the last week of January. Approximately 110 cases will be distributed throughout Austin, Houston, Dallas, and San Antonio. In light of the limited supply, the brewery will be posting a list of accounts receiving Tripel Treat on their social media as it is delivered to each market. The brewery hopes to release future batches of Tripel Treat.