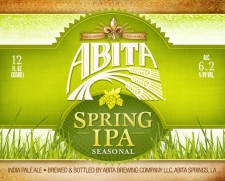 “We’re excited to have another I.P.A. in the Abita family,” said David Blossman, President of the Abita Brewing Company. “If you like our Jockamo, you’re going to love this big, bold Spring I.P.A. It’s a great pale ale that’s just right for this time of the year, when the weather starts to warm up again.” The brew is made with both Amarillo and Centennial hops for a rich and resinous flavor of citrus and spice.

“Spring I.P.A. amplifies the spice in any meal,” said Blossman. “It pairs well with Mexican or spicy Szechwan Chinese food. It’s great with strongly flavored cheeses too, like sharp cheddar or goat cheese.”

Abita Seasonal brews are available for a limited time and are brewed in limited quantities. Each brew is custom created to match the time of year when it is enjoyed. Spring I.P.A. makes its debut in March and replaces Red Ale in the Abita Seasonal lineup.

“Red Ale was a hoppy beer and we hope that our customers will enjoy the complex flavors and distinctive hop character of our new Spring I.P.A.,” said Blossman. Spring I.P.A. has an ABV of 6.25%, IBU of 65 and the color is 9, or brilliant gold.