A Ton of Brooklyn Brewery News

Brooklyn Brewery updates us with a TON of news that should excite any craft beer fan. Read on about some new beers on the horizon, as well as new packaging and delivery for some old favorites. Cheers!

We had a great little party here in Brooklyn to launch our latest international collaboration, with the Amarcord Brewery on a beer called AMA Bionda. Brooklyn Borough President Marty Markowitz was in attendance and said some words. This marks a new chapter at Brooklyn Brewery called Brooklyn Imports, with AMA Bionda (designed by Garrett Oliver) being the first beer we’re bringing into the U.S. There are some pictures of the event here.

We’re putting on an awesome beer dinner at a local movie theater here in Brooklyn, at which you can both eat great good and drink great beer right in the theater. Details here

Here’s an update on our recent expansion here in Brooklyn: 12 new fermenters arrived in one piece and a crane managed to get them erected through the roof without too many challenges. The crew from Rolec rapidly got things piped up so that we could bring all the new tanks on-line by the end of September. There is plenty of other new equipment as well, including in-line carbonation, yeast storage/propagation, and a CIP system. The demising wall between Phase I and Phase II of our expansion came down just before Labor Day to reveal a whole new bank of shiny stainless steel tanks and a maze of pipework. Construction on Phase II is almost complete and we have begun brewing into our new 100 BBL and 200 BBL tanks. Visit this link for photos of the action.

Our Brooklyn BLAST! will be a new addition to the year-round roster. This draft-only beer is only produced in small quantities, so will have limited distribution.

Our Sorachi Ace, as mentioned below, will be available year-round, and also available on draft (previously 750ml bottle only). I’ve attached an image of the tap handle, here’s a live action shot (also showing the new tap handle for Brooklyn Radius, described below):

Correction, Sorachi Ace will be joining Local 1 and 2 as fulltime 750 ml bottles.

Our forthcoming Brewmaster’s Reserve beer, Mary’s Maple Porter, is being brewed right now. It’s a porter made with maple syrup from the farm of our Quality Control Manager, Mary Wiles. It will be available in December.

Our Dry Irish Stout will be available draft-only beginning around January, as a spring seasonal.

There is a version or our current Brewmaster’s Reserve beer, The Companion, available as a 750ml bottle-conditioned version along with a copy of The Oxford Companion to Beer, in a package we’ve dubbed the Brooklyn Box Set. More info here 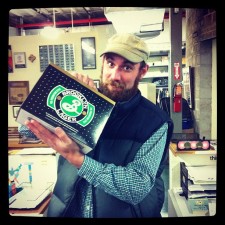 We’ve just recently received our newly packaged Brooklyn Lager cans (which we’ve been canning since 2001) – they now come in a 12-pack (like our canned Summer Ale), pictured being cradled by our Operations Manager.

As far as “new programs”, we don’t have anything available for sale in the market at the moment with the following, but the brewers have begun experimenting with barrel-aging some beer on wine lees. The natural yeasts and other microflora transform the beer, which we then re-ferment in the bottle. These beers are very limited, as they only exist in experimental quantities. We’ve begun to pour some at beer dinners and special events: one version was aged on Riesling wine lees, and the other is a blend of barrels aged on chardonnay and pinot noir lees. On a different note, we also have a version of our recent Brewmaster’s Reserve Cuvee Noire (a dark Belgian) aged for four months in Elijah Craig 12-Yr bourbon barrels, and then re-fermented in the bottle with Champagne yeast, again only available at special events.

And then speaking of strong stouts aged in bourbon barrels, a passerby saw a truck leave the warehouse with a new batch of a beer they thought was labeled “Brooklyn Black Ops“, but we have no idea what they’re talking about.