(San Leandro, CA) — At one point, Mike “Tasty” McDole was just a mild-mannered homebrewer who stumbled into the universe of The Brewing Network, the premier multimedia website for brewers and beer lovers. A regular on the Network’s “Session” show, Tasty gained notoriety with advice to listeners that was 50% informative, 35% conversation and the remainder too inappropriate for this paragraph. 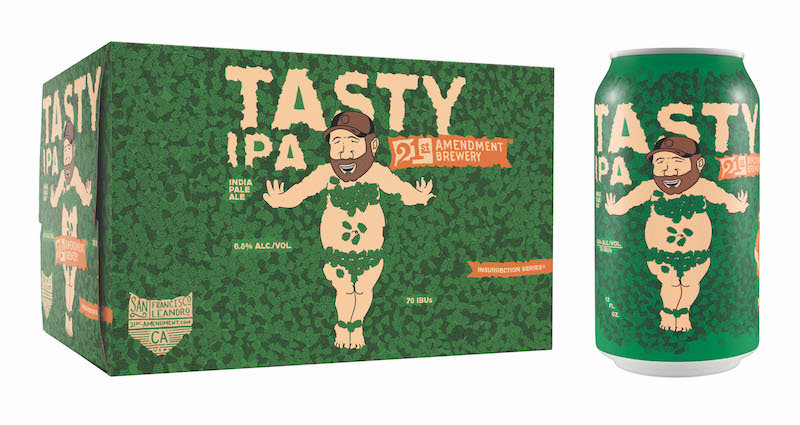 Today, Tasty’s legendary status among the craft beer community is trademarked by his award-winning homebrew recipes and his signature caricature sticker, which you’ll find affixed at nearly every good beer place around the country. And so with great pleasure, and McDole’s personal sticker of approval, 21st Amendment Brewery presents a delicious collaboration, Tasty IPA, a beer that is rooted in friendship, created for the common love of homebrewing and dedicated to the American beer beauty known as Tasty McDole.

“If you like hops, and you love IPA, you’ll definitely enjoy this beer… even in spite of the naked guy swimming in hops on the front of the can,” jokes Shaun O’Sullivan, co-founder and Brewmaster of 21st Amendment. “In all seriousness, this beer is delicious. The lupulin powder is made from the “heart of the hop,” where the hop resins and oils reside, giving this beer bright, fresh flavors and aromas of tropical stone fruits and pine, with a hint of spiciness.”

Tasty IPA is 21st Amendment’s second Insurrection Series beer release of 2017, and in September a limited amount of this beer will be distributed nationwide, on draft and in six pack carriers.

“This year we switched up our Insurrection Series line-up with new beers that celebrate our creative spirit inside and outside of the can,” said Nico Freccia, co-founder of 21st Amendment. “Watermelon Funk kettle sour, a twist on Hell or High Watermelon, was our first release and now we’re coming at you with something totally different – a quenching IPA with a clean bitterness and a ton of hop aroma and flavor, housed inside a package featuring a naked bearded guy covered in hops.”

What’s more? Tasty IPA pairs with spicy foods, peach cobbler, cargo shorts and your favorite beer t-shirt. The can design features McDole lying in a bed of hops, inspired by the iconic fantasy scene in the movie “American Beauty,” and was drawn by Tasty’s son Mark McDole. It serves as a reminder to all homebrewers that dreams do come true, fantasies can become reality, and big burly beer dudes are a thing of beauty.

“At the end of the day, we’re all just a collection of beer geeks having fun, doing what we love in this homage to the art of homebrewing,” added O’Sullivan.

About 21st Amendment
In 2000, Nico Freccia and Shaun O’Sullivan opened the doors to the 21st Amendment brewpub in San Francisco’s historic South Park neighborhood with Freccia managing the restaurant and O’Sullivan spearheading the brewing process.

In addition to quickly becoming one of the city’s favorite pubs, 21st Amendment began expanding beyond the Bay Area by helping to pioneer the movement to canned craft beer. Known for their witty names and delicious brews, 21st Amendment offers year-round selections, as well as seasonal offerings and their ‘Insurrection Series’ of once-in-a-while limited edition release. Sold in 25 states, 21st Amendment operates out of its new San Leandro brewery headquarters and is among the top 50 craft beer brewers in America.