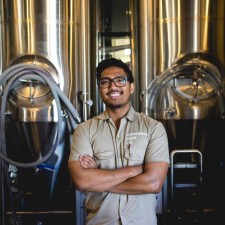 (San Diego, CA) – Abnormal Beer Company is excited to announce a $1 million expansion investment to fulfill their growing demand by expanding their brewing facility and creating a private event space. The current fermentation capacity will grow from 80 barrels to 440 barrels, increasing production by 550%. The expansion will add 2,000 sq. ft. on to the existing 5,000 sq. ft. building, which also houses Abnormal Wine Company and The Cork & Craft Restaurant in Rancho Bernardo, San Diego’s first craft brewery, urban winery and restaurant under one roof.

Abnormal Beer Co.’s Head Brewer and Beer Curator, Derek Gallanosa looks forward to future brewing projects, as he is able to experiment with a wider variety of styles on a larger scale. “The name Abnormal Beer means that we want people to approach our beer with a different mindset,” said Gallanosa “of wanting to know more about the ingredients, the brewing process and the flavors they are experiencing.” With the added space, Abnormal Beer Co. is enhancing their brewing facility with the following:

“After only six months of brewing, we are excited to expand our presence in San Diego’s thriving craft beer scene,” said Elvin Lai, co-founder of Abnormal Beer Co., “We look forward to the opportunity to explore and create new styles as well as distribute our beers to a wider spectrum of local beer-drinkers.”

Growth within the brewery gives Abnormal Beer Co. more space to brew their most popular beers – Debut IPA, Mostra Mocha Stout and 5PM Session – as well as seasonal and limited releases, such as a Dry-Hopped Belgian-Style saison brewed with calamansi juice in celebration of San Diego Beer Week. In addition, Abnormal Beer Co.’s increase in production will create an opportunity for widened distribution throughout the San Diego region and beyond.

Abnormal Beer Co. will remain open through the expansion, with anticipated completion in Fall 2016.