(Cincinnati, OH) – MadTree Brewing Company received a gold medal at the 2018 Great American Beer Festival (GABF) competition. Presented by the Brewers Association, GABF is the largest commercial beer competition in the world and recognizes the most outstanding beers produced in the United States. The top three winners in the competition’s 102 beer-style categories were announced September 22 at the Great American Beer Festival awards ceremony held at the Colorado Convention Center in Denver, Colorado. 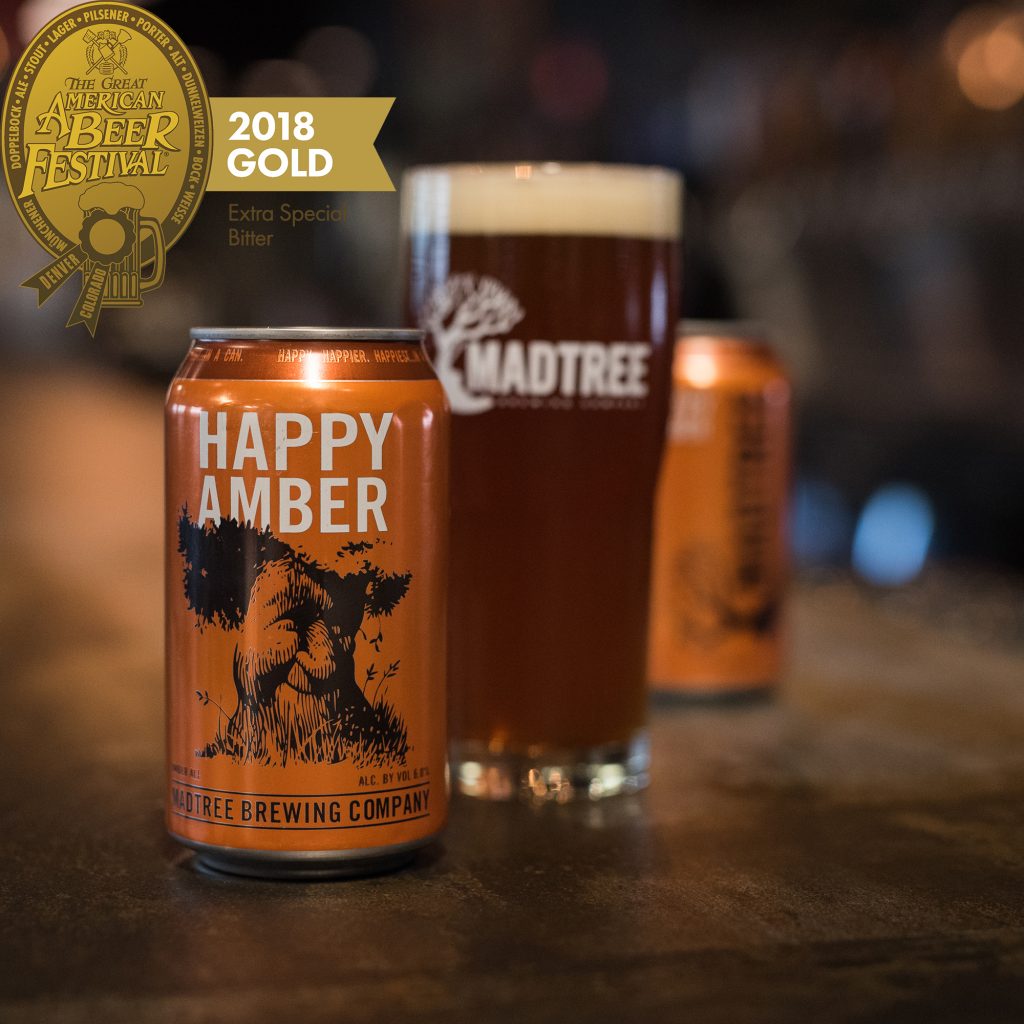 MadTree was recognized in the Extra Special Bitter beer-style category for its Happy Amber. This dry-hopped amber ale combines caramel and biscuit malt flavors in happy equilibrium with late addition American hops. The approachable balance is intentional although the name is a “hoppy accident.” There were a total of 72 entries in this category from breweries around the country. Details on the beer, including a recipe to brew it at home, is available on the MadTree website.

“We’re beyond excited to win the gold for Happy Amber. This was one of the original three beer recipes we brewed in our basement. In typical MadTree fashion, we brewed it 30+ times to dial in the perfect balance of flavors. We’ve always stood behind Happy Amber so it’s really gratifying to see it recognized as one of the best beers in the country,” said Brady Duncan, MadTree co-founder. “Plus, it was awesome to see Ohio breweries bring home a total of 14 medals. Ohio beer drinkers are lucky to have so many great beers to choose from.”

About MadTree Brewing Company
Cincinnati’s MadTree Brewing made history when they opened in 2013 by becoming the first modern craft brewery to can its beer in Ohio. When it comes to brewing, they have carved their own path. They mix. They mash. They methodically bring quality beer to life, and have fun doing it. Demand from the growing community keeps MadTree motivated and moving. In return, they make nothing but the best beer and opened their new production brewery and taproom in February 2017. They are founded and continue to grow on the notion that beer builds community and community builds beer. MadTree distributes its beers throughout Ohio, Kentucky, and Middle and Eastern Tennessee.