Longmont, CO – The Oskar Blues CAN’d Aid Foundation recently partnered with Grassroots Outdoor Alliance to raise $50,000 for ColoRADo flood recovery at a fundraising event held at The Big Red Barn in Highland Meadows in Windsor. Grassroots’ weeklong Colorado summit was held in Loveland in June, and the party, which brought together lovers of craft beer, the great outdoors and philanthropy, was one of the highlights of the trade show.

“We always incorporate a local charitable component to our shows, and when we became aware of The CAN’d Aid Foundation’s incredible work with Colorado flood relief, as well as their focus on outdoor pursuits through their Treads & Trails programs, we knew we had a great fit,” said Hope Buttitta, Director of Operations and Finance for Grassroots.

Buttitta and CAN’d Aid director Diana Ralston began working on the partnership in early March and were blown away by the event’s success. The ‘Dusters, as well known for their philanthropic passion for giving back as they are for their unique blend of jam-grass, put on a stellar show. With perfect weather and plenty of Oskar Blues brews on hand, the party was a true celebration of all things outdoors. 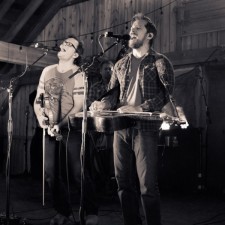 Grassroots Outdoor Alliance is a group of independent outdoor retailers organized to serve the needs of its members, who operate over 100 independent specialty outdoor stores throughout North America. The organization is based in Asheville, North Carolina. CAN’d Aid and Grassroots connected through a mutual relationship with Colorado’s Grammy-nominated bluegrass rock band, The Infamous Stringdusters, who performed at the event.

Ralston and Buttitta set a fundraising goal of $15,000, earmarked for rebuilding multi-use trails and the construction of new trails in flood-affected areas in Lyons, Longmont and Boulder, and reached out to Summit attendees in early April. By the time the event rolled around, they had commitments totaling nearly $12,500 from retailers and manufacturers. The party with the ‘Dusters brought in an additional $7,500 through individual donations with venerable outdoor apparel company Patagonia kicking in another $5,000.

“It was awesome to see the generosity and passion these folks had for our local communities. As soon as people arrived, they headed straight to the CAN’d Aid tent with their wallets open” Ralston said.

With Oskar Blues Brewery’s commitment to match every dollar raised by CAN’d Aid, the event more than doubled the original fundraising goal. Funds will be distributed to local trail advocacy and trail building organization like Boulder Mountainbike Alliance (BMA) in the coming months. CAN’d Aid & Grassroots are already in discussions regarding additional collaborations to further their mutual goals in outdoor recreation and sustainability.

About CAN’d Aid Foundation:
The Oskar Blues CAN’d Aid Foundation was formed as an immediate response to the massive flooding that devastated our hometowns of Lyons & Longmont, CO, in September 2013. To date, CAN’d Aid has donated $650,000 for flood recovery and an additional $50,000 to charitable causes focused on outdoor rec, child & family advocacy and sustainability initiatives. Shakin’ things up in the world of non-profits, the public charity features funky, fractured, grassroots grants to fund worthy projects from coast to coast. By putting our own spin on what charitable giving looks like, we’re able to stay nimble, respond quickly and stay true to our roots. Every dollar raised by the CAN’d Aid Foundation is matched by Oskar Blues Brewery-doubling the “do-goodery” and maximizing the reach.

About Oskar Blues Brewery:
Founded as a brewpub by Dale Katechis in 1997, Oskar Blues Brewery launched the original craft beer-in-a-can with Dale’s Pale Ale in 2002 using a tabletop machine that sealed one can at a time. In 2008, the makers of the top-selling pale ale in ColoRADo moved into a 35,000-square-foot facility in Longmont, ColoRADo. The brewery has since experienced explosive growth-packaging 59,000 barrels of beer in 2011 and 86,750 barrels in 2012. In December of 2012, Oskar Blues opened the doors to an additional brewery in Brevard, North Carolina. Together, the breweries packaged over 119,000 barrels of beer in 2013, distributing its trailblazing craft brews to 35 U.S. states.

About The Infamous Stringdusters:
For the five members of The Stringdusters-Andy Hall (dobro), Andy Falco (guitar), Chris Pandolfi (banjo), Jeremy Garrett (fiddle) and Travis Book (upright bass)-reverence for traditionalism has always been only part of the equation. The group has always remained intent on fostering something bigger, more original. It’s this desire-and the combined efforts of uniquely creative minds-that has brought the quintet to its current place as both multi-dimensional string explorers and strong voices of support for environmental conservation and sustainability.