Season 4, Episode 39 – This week, we’re exploring some new beers, as well as some classics from Orange County, California!

We tend to say this a lot, but what a time to be a beer geek. Craft and Independent brewery numbers are at an all-time high, and the variety of beer available to beer drinkers is simply amazing. This week, we’re hanging out in our proverbial backyard and drinking some brew from sunny Orange County, California. 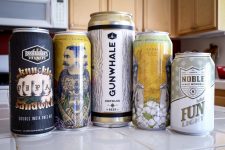 In addition to the newer beers that we’re drinking this week, we’re also revisiting a beer that was the talk of the interwebs when John and Matt first got into Craft Beer. Which beer might this be? The legendary Knuckle Sandwich from Bootlegger’s Brewery. It’s a beer that is polarizing to many beer geeks now, but it’s true to its roots and really packs a punch (puns!).

Thanks go out to Gunwhale Ales for hooking us up with their beer this week.