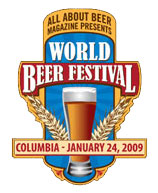 The World Beer Festival comes to South Carolina, where curiosity and enthusiasm for good beer is exploding. Changes in state beer laws have vastly expanded the range of beer styles available and Columbia, in particular, boasts an excited beer community that is eager to share new beer experiences. Join the fun.

» When: January 24, 2009
» Where: Columbia Metropolitan Convention Center in downtown Columbia.

Designed as a beer tasting, the World Beer Festival encourages small samples from a wide range of world-class beer styles. With different areas devoted to beer, entertainment, food, merchandise and relaxation, the festival creates a unique atmosphere that promotes responsible consumption in a relaxed, enjoyable setting. Our goal is that our guests leave the festival appreciating and understanding more about beer flavor and diversity.

Along with building a thriving local beer culture, we are also committed to working with other local players that help keep communities strong. The World Beer Festival presents the best local music, and hosts local restaurants and catering companies, with the goal of creating an entertaining, educational and welcoming environment for the festival. We also partner with a local non-profit organization and donate a part of the festival proceeds to them. Over the years, the World Beer Festival has contributed over $100,000 to local causes.