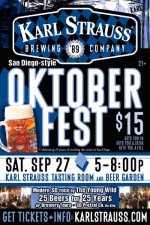 San Diego, CA – To celebrate 25 years of pioneering craft beer, Karl Strauss Brewing Company is throwing a San Diego-style Oktoberfest. The event takes place on Saturday, September 27, from 5:00 to 8:00 p.m. at its Tasting Room and Beer Garden in Pacific Beach. “Oktoberfest has always been in our DNA and we’re stoked to throw a party showcasing authentic San Diego. We’ll have 91X broadcasting live from the event, hot pretzels, street tacos and a local rock band to get the crowd going,” says Paul Segura, Brewmaster, Karl Strauss. “We’re also sharing our 2014 batch of Oktoberfest, along with 25 beers for 25 years, including a bunch of small-batch beers we’ve stashed away.”

The event is 21+ and $15 ticket includes admission, a half-liter commemorative stein and first beer fill. “I can’t wait for people to try this year’s batch of Oktoberfest,” says Segura. “We use 100% imported Vienna and Munich malts and we lagered it for four weeks, making this beer particularly sessionable.” Doors open at 5:00 p.m. and local rock band The Young Wild take the stage at 6:30 p.m. The Karl Strauss Brewing Team will be hosting behind-the-scene brewery tours and tapping specialty casks throughout the evening. San Diego Pretzel Company will be onsite serving up fresh soft pretzels, and in true San Diego fashion, there will be a taco cart selling tasty grub for purchase.

For more information about Karl’s Oktoberfest and to purchase tickets to the event, click here.

About Karl Strauss Brewing Company
Karl Strauss Brewing Company has pioneered the San Diego beer scene since 1989 with innovative beer releases like Big Barrel IIPA, Wreck Alley Imperial Stout and Mosaic Session Ale. The brewery has won 64 medals over the past four years and its Red Trolley Ale is one of the most award winning beers in the world. The company is currently ranked #41 on the list of the country’s top craft breweries with sole distribution in California. 2014 is on pace to be another exciting year of double-digit sales growth, with the main brewery tasting room and beer garden in Pacific Beach now open.