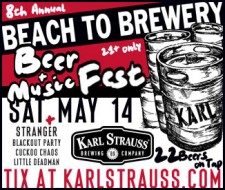 San Diego, CA – Karl Strauss Brewing Company and the Surfrider Foundation, San Diego Chapter, are hosting the 8th Annual Beach to Brewery Beer and Music Fest on Saturday, May 14, 2011 from 2pm-7pm. The benefit takes place at the Karl Strauss Main Brewery in Pacific Beach and includes 22 beers on tap, live local music, and a non- competitive bike ride from the beach to the brewery.

To celebrate Karl Strauss’ 22nd Anniversary, the event will feature 22 unique beers on tap, including the new Blackball Belgian IPA, 22nd Anniversary Barrel-Aged Vanilla Imperial Stout, seasonal favorite Pintail Pale Ale, and World Beer Cup/Great American Beer Festival gold-medal winning Red Trolley Ale. In addition to the diverse assortment of beers on tap, there will be 5 special casks created just for the event, including a Scotch on Scotch brew and a Lavender Hefeweizen. Tours of the expanded brewery and bottling line will be available throughout the event.

Beach to Brewery is known for showcasing local talent, and this year is no exception. Little Deadman kicks things off-they recently recorded a new album and this is their first show in months-followed by indie rockers Cuckoo Chaos and Blackout Party. Stranger will close the night with their world beat rock. Local non-profit, Sezio, will be on-site screen printing made-to-order band t’s and a limited edition event shirt.

To date, Karl Strauss Brewing Company has raised over $80,000 for the local San Diego Chapter of the Surfrider Foundation through Beach to Brewery. This year, in an effort to support Surfrider’s “Rise Above Plastics” campaign, guests will be given a reusable souvenir cup that will replace more than 10,000 disposable plastic cups at the event. Karl Strauss has hired Hands-On Recycling to individually sort the remaining recyclables from trash to divert unnecessary waste from landfills. Leading up to the main event, the company is supporting Surfrider’s cause in a hands-on way by hosting an employee beach clean up to keep its local Pacific Beach neighborhood clean.

Tickets for Beach to Brewery are $25 pre-sale and $30 at the door. Attendees have the option to add a 1-year Surfrider membership for the discounted price of $15 when purchasing their event ticket online. The event has sold out the past four years, so guests are encouraged to buy tickets early. Free shuttles to and from the event will depart from Dusty Rhodes Park in Ocean Beach as well as the Library in Pacific Beach and run throughout the event. For tickets and more information visit: www.karlstrauss.com.