(Denver, CO) – Great Divide Brewing Company will host their 21st Anniversary Party on Saturday June 13th, 2015 from 2-6pm at the site of their new location in Denver’s River North neighborhood. The party will feature unlimited access to Great Divide beers, live music, outdoor games, and the first public tours of the new production facility. The first phase of the brewery’s expansion– which includes a Barrel Bar, warehouse, and canning line– is set to open this summer. The original location on Arapahoe Street will continue to function as the company’s primary brewery and taproom. 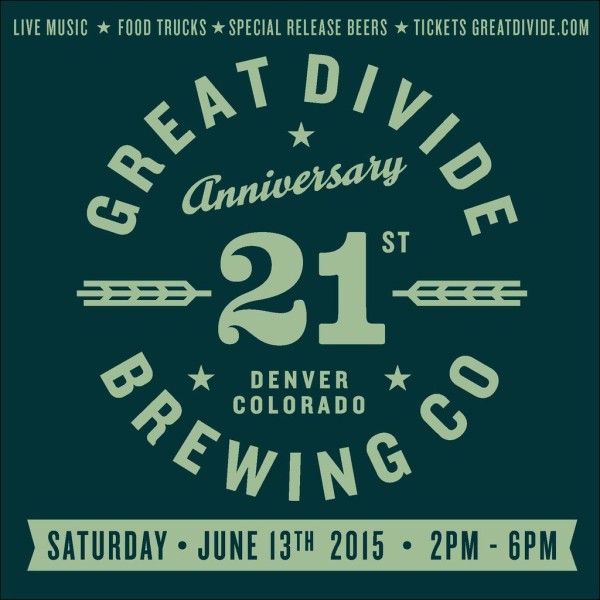 To celebrate turning 21 and launching the first phase of their expansion, this will be Great Divide’s biggest party yet. Performances from Brent Cowles, Oakhurst, A. Tom Collins, and the Gin Doctors will take place throughout the afternoon while attendees enjoy the full Great Divide beer lineup, including a number of specialty and limited release offerings. In addition to a vertical tasting of Old Ruffian, throwback beers, and Yeti floats, there will be five rare sour beers, including the yet-to-be-released 21st Anniversary American Sour Ale, brewed specifically for this year’s event.

This American sour is a celebration of 21 years of brewing with Bold Character. This commemorative release opens up with bright, tart, kiwi and citrus notes before mellowing out with a hint of oak and subtle white wine-like character. Soured with lactobacillus and brettanomyces and aged for 9 months in wine barrels, 21st Anniversary is notably complex while retaining a delicate approachability.

Tickets are on sale now at www.greatdivide.com/brewery/anniversaryparty. A $40 ticket provides unlimited tastings of the Great Divide lineup, live music, a generous snack at one of the food trucks on-site, free bike valet provided by Bike Denver, and a commemorative and reusable stainless steel pint. Tickets will most likely sell-out, but if available they will be $45 at the door.