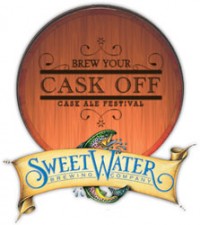 Atlanta, GA – From restaurants to media, first-time brewers to home brewing clubs, SweetWater Brewing Company has gathered an extensive and exciting list of participants for their second annual “Brew Your Cask Off” Cask Ale Festival.

Join us March 5, 2011 from 6-10pm as attendees are invited to try the recently crafted casks from more than 80 guest brewers.

As far as the competition portion of BYCO goes, all entries will be judged by a handpicked group from the Atlanta scene led by John Pinkerton, Brewmaster at Moon River Brewing Company in Savannah. The winning casks will be announced at 9pm, the evening of the festival.

Entries will also be available for festival goers to sample and vote for the People’s Champ Award. The judges’ top four casks and the People’s Champ will have their casks recreated and served at the SweetWater 420 Fest April 15-17 in Candler Park.

The festival area, now in front of SweetWater Brewery, will be tented making this a rain or shine event.  In addition to all the specially-created cask ales, attendees can also savor SweetWater’s award-winning array of year round brews, get their fill with Williamson Brothers BBQ, Ormsby’s, and other food vendors, enjoy live music, visit with participating non-profits and even take a guided tour of the infamous brewery.

Pets are not allowed at “Brew Your Cask Off,” but feel free to bring anyone else that is 21 and up with a valid form of ID (of course).  2011 sponsors include: O-I, Great Western Malting, Grandstand Sportswear & Glassware, Draft Magazine, and All About Beer Magazine.  Tickets are on sale now and available online at www.brewyourcaskoff.com for $35 in advance, or $40 at the door.

About SweetWater Brewing Company:
SweetWater Brewing Company is an Atlanta-based craft brewery specializing in aggressive West Coast style beers. SweetWater’s brews are unpasteurized and designed to be consumed fresh so distribution is limited to the Southeast. The award-winning lineup of year-round brews includes SweetWater 420, IPA, Blue, Sch’Wheat and Georgia Brown. SweetWater also features a Catch and Release series of beers available on a limited basis throughout the year, and an experimental, one-time-only Dank Tank series. The SweetWater Brewery, open for tours every Wednesday, Thursday and Friday at 5:30 p.m. and Saturday at 2:30 p.m., is located at 195 Ottley Dr NE, Atlanta GA 30324. For more information about SweetWater Brewing Company, please visit www.sweetwaterbrew.com.