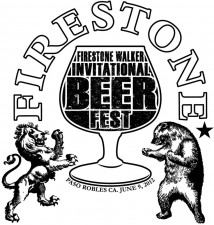 Paso Robles, CA – Firestone Walker Brewing Co. partnering with Paso Robles Pioneer Day will put on the very first Firestone Walker Invitational Beer Fest June 9, 2012. The Beer Fest will feature the very best breweries in the world paired with some of the best restaurants in California, right in the heart of wine country.

The idea behind the Firestone Walker Invitational Beer Fest is to create the premier beer festival in California, by inviting the top brewers in the world to come and show-off their finest beers. The Beer Fest will be held at the Paso Robles Event Center taking advantage of one of the most iconic venues on the Central Coast.

“We wanted to take the best parts of our favorite festivals and combine them to make an awesome experience for the festival goers and brewers right here on the Central Coast,” said Matt Brynildson, brewmaster for Firestone Walker.

Every Brewery in attendance will pour one ‘sessionable’ beer, a beer that’s less than six percent alcohol by volume, and one rare beer, along with a brewer to talk to attendees about their beers.

Breweries that are scheduled to appear include, Three Floyds from Indiana, Founders from Michigan, Mikkeller from Denmark, Dogfish Head from Delaware, Cigar City from Florida and many California breweries including, Russian River, Stone, Pizza Port and Sierra Nevada.

The Beer Fest will also include sampling from some of the best restaurants on the Central Coast so guests will be able to pair their favorite local chef with their favorite beers. Beer Fest-goers will also be treated to live music on two stages featuring both local acts as well as more established artists.

This is the first of what will be an annual event that will be anticipated by locals and beer lovers from all over the West Coast. Expected attendance is more than 2200 people. Please visit firstonebeerfest.com for more info and a full list of the breweries. Tickets will go on sale February 10th check the website to purchase.