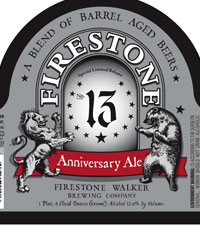 Firestone’s anniversary series, a unique blend of barrel aged beers, has become quite a phenomenon each year as beer fans from all over the U.S. seek out this special limited release. In years past releases have sold out at the brewery in just a few weeks and these beers have garnered a hefty price tag in the market.

“These unique barrel aged beers have really changed the public’s perception of beer,” said Brewmaster Matt Brynildson. “The care and time that went into this blend is more akin to wine than beer,” he added.

Brynildson again enlisted the help of Paso Robles area wine makers to assist in the blending of several barrel-aged beers into the final product. Barley wines, imperial stouts and an imperial brown are just a few of the beers making up the final blend. Many of the component beers have spent over 2 years aging in a combination of retired bourbon, rye, and wine barrels. This process contributes unique and one-of-a kind flavors not typically found in beer.

The anniversary release will be available to select accounts in limited quantities throughout California, Arizona, Nevada, Washington and Oregon later in November. Only 1000 cases of this vintage beer were made and Firestone Walker co-founder David Walker doesn’t expect it to last long.

“Our anniversary beers have become somewhat of a phenomenon. Each year beer fans make the pilgrimage to the brewery to get this limited release and before we know it, it’s gone,” said co-founder David Walker.

The release party on the 14th of November will also feature music, food and a few other special beers only available at the brewery. Bottles of “13” will be on sale for $21.99 plus tax with a 12 bottle limit per person to insure that everyone has an opportunity to purchase. For more information on the “Release Party” at the Firestone Walker Brewing Company call Veronica Jaurez at 805-225-5911 extension 607.