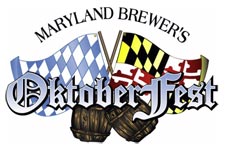 WHO: Hosted By the Brewer’s Association of Maryland

WHY: The Brewer’s Association of Maryland is proudly hosting the 7th Annual Maryland Brewer’s Oktoberfest at the Maryland State Fairgrounds in Timonium. This lively festival will include beer gardens featuring over 75 beers from twelve local breweries, a delicious assortment of food, live bands, exciting contests, oompah bands and much more.

Attendees will be entertained by dancing and musical performances on two stages. The main stage will consist of local acts such as Black Falls Band, Great Train Robbery and the Kelly Bell Band. The “German” stage will feature Baltimore’s finest oompah revelers – the Edelweiss Band and the Home Brew Contest. Everyone will also be amused by the Miss Oktoberfest Contest, Baltimore’s Best Beer Belly Competition and the Wife Carrying Contest.