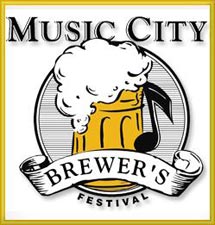 Thoughts, Not a Review, From a Guy Who Attended and Liberally Partook
submitted by: Friend of Thefullpint… Brooks

Beer. You’ve heard the sayings – It’s not just for breakfast anymore…It’s proof God loves us… Well, yesterday’s Music City Brewer’s Festival in downtown Nashville confirmed their validity to me and several thousand other passionate suds partakers. It was great.

We got there with friends from out of town around 3:00 PM. (The fest went from 2 to 8 P.M.) After proving our ages and getting a wristband and a cup, we were greeted by the friendly folks of Schlafly’s from St. Louis. A good way to start out with was their fine Pale Ale only recently available to us Nashville beer drinkers. My favorite is their APA. Anyway, now I don’t have to worry about grabbing a bunch to bring back home on our trips to St. Louis.

With beer cup in hand, we plowed into the crowd of thousands of sweaty imbibers towards the shade of the trees where we fought off elbows and sweat to the head of the line for the almost incomparably rich coffee flavored Highland Mocha Stout similar, at least to me to both O’Fallon Smoke Porter and Mudpuppy Porter. This led us to the C.A.O. booth where we grabbed fine cigars and lit up to the sound of the band, one of many which kept a constant flow of music all afternoon. Life was good and getting better.

We put away as much beer as possible and then some. Local brewers – Yazoo, Bosco’s, Blackstone, Big River, all with impressive ribbon winning brews were there. Our newest additions to Nashville, Boulevard and New Belgium brews were on hand. They finally found their way east across The Big River. Atlanta’s Sweetwater, Atlanta Brewing (Red Brick and others) and Athens’ Terrapin represented their state in fine fashion. The servers and bartenders from Nashville’s The Flying Saucer slung beer for Sweetwater and Yazoo. One of the servers who’s hot enough to boil water without a flame, managed to cool the guys off with a multicolored automatic water gun. A bunch of our buddies from the saucer joined us to made the rounds. Fantastic Southern BBQs and other delights abounded.

One of my all time favorite breweries, Abita had a significant presence handing out their variety of brews but I enjoyed in particular their newest Jockamo I.P.A. as fine an I.P.A. as any around named for the New Orleans Mardi Gras Indians. Plenty hoppy. I miss the pecan though! Bowling Green Brewers (I think is their name) from Kentucky, offered a brew which, as advertized, tasted similar to Newcastle. Not bad company. A special treat at the beerfest was the participation of Olde Towne Brewing Co., Alabama’s only microbrewery which burned last summer but just reopened for brewing in its new building. Good beer and good luck to them and to Alabama’s Free the Hops drive to rid the state of its antiquated beer laws.

There were many,many other beers represented. Sierra Nevada, Flying Dog, Widmer, Avery, Miller to name a few and many foreign brews such as Paulaner, Spaten and the most recent Belgium brew, Budweiser. Although I’m not a cider drinker, Woodchuck and maybe others made a strong appearance. For some reason I’m unable to explain, I can’t remember all the brewers but suffice it to say, each added golden, tan, dark, red, etc. liquids which tickled your pallet and made you forget it was 90+ degrees even when you could grab some shade. It simply was a beer lovers heaven. We all agreed, it was an absolute blast. I mean…get real…beer, cigars, overflowing hot and sweaty young things everywhere. I told my new friend with BBC, (Bluegrass Brewing Co out of Louisville and one of the finest) that their moniker stood for all that was good at the fest…Beer, Boobs and Cigars…Now how can you beat that?