In addition to my journey into craft beer podcasting here at The Full Pint, I have been sent on some very fun assignments to immerse myself into craft beer culture.  It’s pretty easy to do that with so many new and diverse breweries spread out all over.  Danny and Jonny have paid their dues traveling all over Southern California, so they have elected me to do the hard work: visiting breweries, tasting beer, and providing feedback.  I know, it’s a hard job, but somebody had to do it.  The powers that be at The Full Pint have a short list of new breweries to check out, and at the top of that list is San Pedro’s Brouwerij West.  That name might ring a bell to some of you, and it should, as Shelton Brother’s yearly festival was held here a few years ago, while Brouwerij West was transitioning from gypsy brewery to production brewery.  Please follow along with me as I share my weekend journey in the city of San Pedro as I check out one of Los Angele’s hottest new breweries, Brouwerij West. 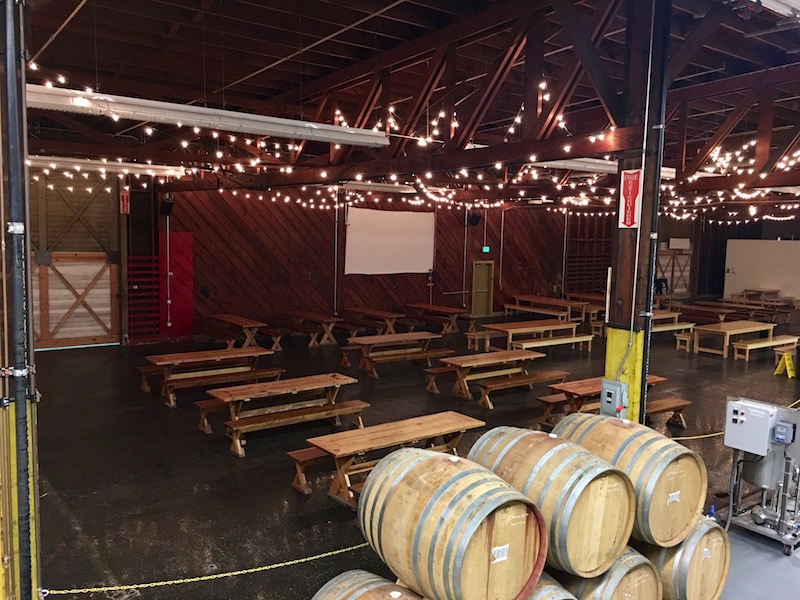 I really didn’t know much about San Pedro other than there’s some restaurant walking 90s abortion Guy Fieri visited, a giant bell where they shot the Power Rangers and Cabrillo Aquarium. As with most things, I was wrong. San Pedro is more than just a beach city in SoCal, it’s almost its own world. In 1542 some Spanish dude named Juan Rodriguez Cabrillo (Sound familiar?) found the bay and some years later, it served as a port for America during WW2 at one point having fourteen battleships and cruisers, sixteen support ships and two aircraft carriers docked in her waters. Most of this information was recited almost verbatim by Mercer, who spoke about San Pedro with a glowing pride as we drove through the winding roads that hug the coast in a way that would make Trump blush. We arrive in an unassuming warehouse sitting by the water where we were met by Phil Cruver, CEO of Catalina Sea Ranch. He took us on a tour of his facility, which is finding new and innovative ways of farming mussels and other tasty crustaceans in a way that will supply local frantic chefs with the freshest product without harming the environment. After stopping at local favorite Busy Bee for some amazing sandwiches, we pressed on to the famous Korean Friendship bell and that one basketball court where every rapper in the 90s shot their music videos. As I watched stormy clouds cover Catalina Island in the distance, I knew that rain will come and it made me thirsty. Thirsty for that sweet elixir that keeps us coming back for more and the reason most of you are probably reading this, the beer.

Ryan Mercer had been gypsy brewing for over 5 years, but due to the constraints of dealing with another brewers’ system, decided to take the leap and open his own brewery where he’d be able to experiment with some of the styles and techniques he picked up while spending time in Belgium. Using a unique mash filter they are able to make beers using ingredients like raw barley and buckwheat while also being able to use mixed fermentation which opens up the doors to a wider range of flavors not possible under a conventional set up. The brewery is also one of the first I’ve seen to reduce their carbon footprint to almost none with solar panels installed on the roof, powering the whole operation, making it one of, if not one of the few green breweries. As we toured the brewery, I’m sipping on their version of a hazy pale ale, Switcheroo, fueled with Simcoe and chinook and dry hopped with a personal favorite, Citra. We made our way to a beautifully decorated table lit with candles as we were met by Chef Paul Buchanan and the rest of the team from Primal Alchemy catering, a catering company out of Los Angeles. 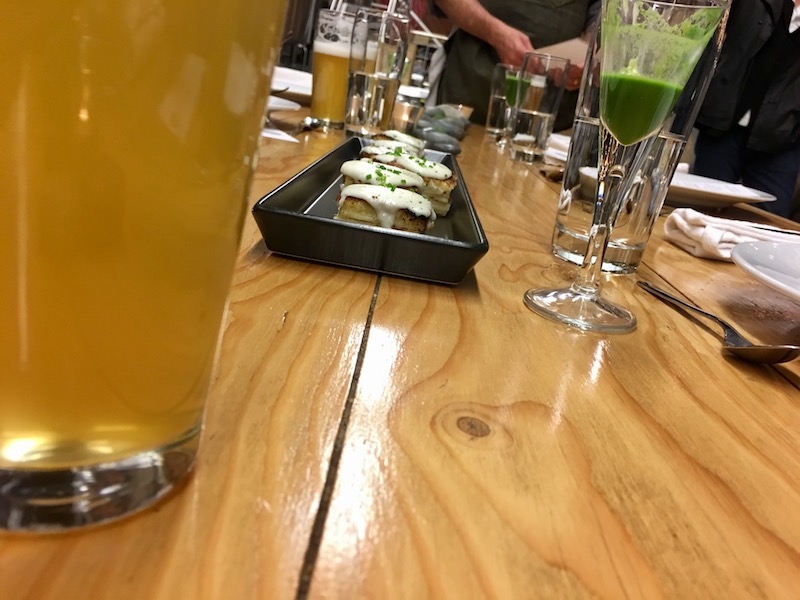 Primal Alchemy, owned by Chef Buchanan prides itself on using fresh and locally sourced ingredients for each dish and to be honest, he’s got a sweet mustache. As the first dishes arrive paired with our first beer, I realized that this would be a multi course dinner each with a dedicated pour, I had to stay sharp. After having the Apricot wood smoked wild salmon with potatoes served with Brouwerij West’s “Dog ate my Homework” Blackberry Saison that paired nicely with the Mustard Vinaigrette, I knew that my sharpness was questionable, but fuck it, I’m not driving tonight. After a stellar line up of foods and ingredients whose names I can’t pronounce paired with an array of delicious Brouwerij West’s beers, it was time to jump in the shuttle and head back to the nearby Double Tree and drunkenly wander the docks. After checking out the next day, I drove home with a headache and a newly found appreciation for San Pedro all thanks to Brian, Dave and their beers that truly showcase the passion and eccentricity that makes this town such a gem.

Don’t Wait in Line for Beer – A Case Against Pliny-Hunting Pucker Up: The Sour Beer Movement is Here to Stay