The Magic That is Tree House Brewing 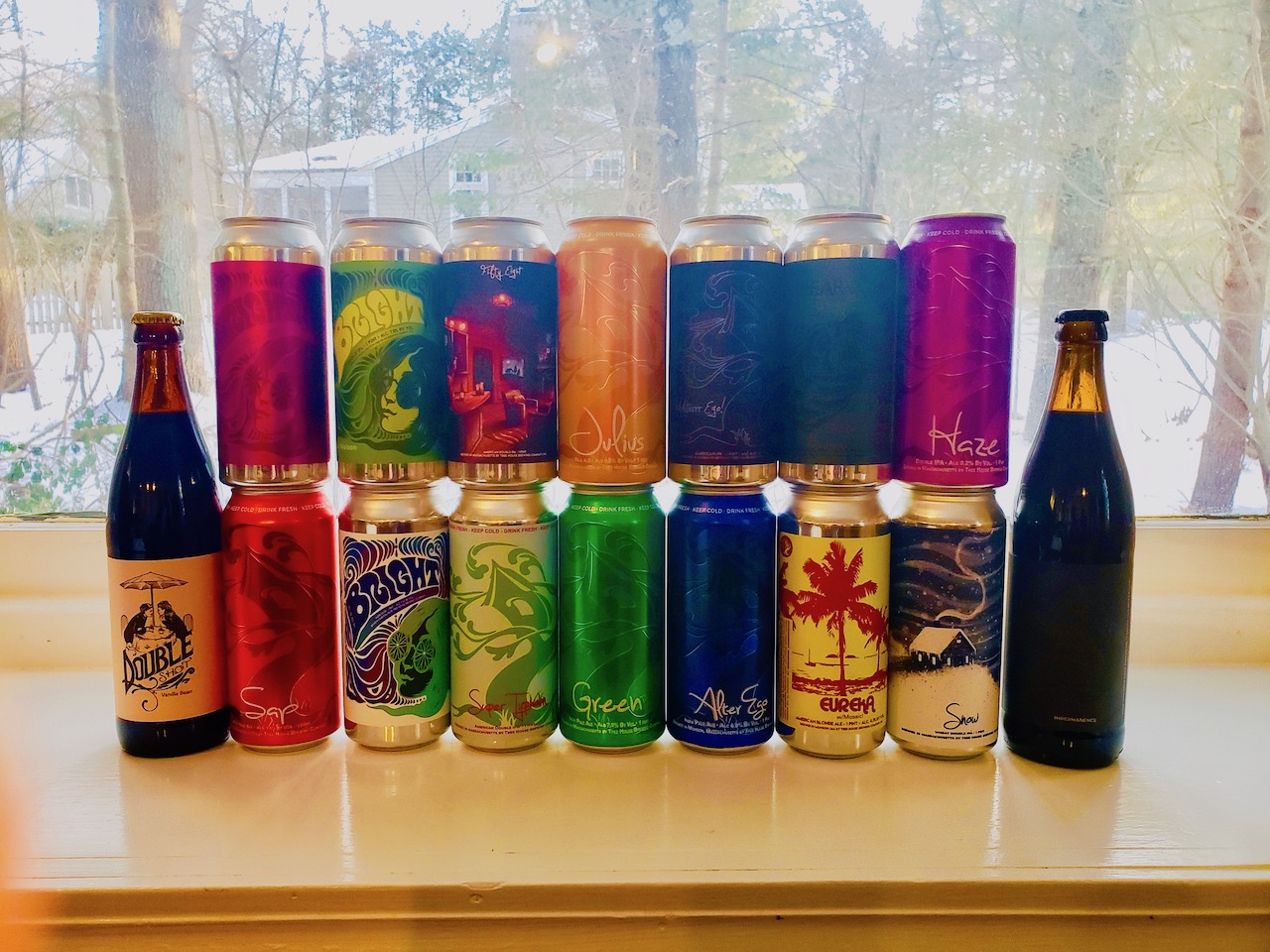 Just after noon on the Friday before the Super Bowl, with the polar vortex keeping temperatures in the low teens, I pulled off Route 20 in Charlton, Massachusetts and onto the picturesque road leading up to Tree House Brewing Company, and I was immediately directed into the overflow parking lot. After a hike up the hill (they have a shuttle bus, but I felt like stretching my legs), I saw the reason why. Despite the sub-freezing temperatures and the fact that it was a weekday, there were hundreds of people waiting in line to stock up on an impressive selection of beers before the big game. While the line was on the high end that day, it is not uncommon to see long lines of people at Tree House, especially on a weekend or on a day that includes a rare beer release. Having made the drive and needing to do a little more “research” for this article, I did the only thing I could do. I waited in the long but moving line until it was my turn to buy a substantial amount of Tree House beer.

If you want to try a beer from Tree House your best bet is to go to the brewery, or to have good friends who are willing to pick up the beer for you. Outside of a few rare occurrences, every drop of beer brewed by Tree House is sold on premises, either through daily can and bottle sales or through pours at their onsite taproom. They don’t even distribute to local draft accounts. Despite the lack of distribution Tree House has become one of the largest breweries in Massachusetts in terms of total volume, and they continue to grow to meet the incredible demand for their beer. Since Tree House opened in 2012, they have been growing at a steady pace. Their first brewery was a barn owned by one of the co-founders where they filled growlers on the weekends. From there they opened their first official brewery in Monson, and quickly maximized capacity. In the summer of 2017 Tree House opened their current brewery, a massive facility in Charlton that would allow for huge volume growth, and they are already doing work to expand. One other note for anyone traveling to the area, Charlton is about a 90-minute ride from Boston depending on traffic (in the late afternoon on a weekday it is much longer). As a Boston-based beer writer, I hear from a lot of people traveling to the city who want to try Tree House, and I let them know that they’ll need a car and a free afternoon.

There are a small number of “hype breweries” in the country right now, the places that drive huge buzz on Instagram, in beer trading circles and on crowd-sourced rating sites, and Tree House is one of the leaders of this category. Tree House has eight of the 30 highest rated beers in the world on Beer Advocate and eight of the 40 highest rated beers on Untappd. Considering the sheer number of breweries in the world it is crazy to believe that so many of the top-rated beers could be made by a single establishment. Obviously, you should take the rankings on these crowd sourced sites with a giant grain of salt, but it says a lot about Tree House’s place in the current craft beer culture that so many of their beers have gained widespread acclaim. Unfortunately, this craziness has also meant a robust secondary market for the beer, both in online trading and, unfortunately, in illegal online sales (do a quick eBay search and ignore the “empty cans” designation that is obviously a way to keep the posts from being deleted). I’m sure some of the people rolling out of the brewery with 8-10 cases at a time are buying for friends, but others are making a profit. To be honest, I rarely make the trek out to Tree House and the hype is the only reason. I really enjoy their beer and the people at the brewery have always been awesome, I just don’t like waiting in line for the beer. Everything I’ve heard suggests that the increased volumes and new set-up have helped minimize the lines most days, so I will probably make more frequent trips (just not on the Friday before the Super Bowl).

So how did a little brewery in central Massachusetts become the darling of beer geeks around the country? It starts with Julius, Tree House’s flagship IPA. Julius has all the features that have come to define the New England Style hazy IPA, so much haze that the beer is opaque, huge hop flavors and aromas, and extremely soft bitterness. When Tree House started selling Julius in 2012 you couldn’t find another beer like it without a long drive to a different small brewery destined for national acclaim located on a hill in rural Vermont. Although Julius wasn’t the first NEIPA, it was the introduction to the style for many people and resulted in crowds forming at the startup brewery. These crowds quickly led to buzz through word of mouth and online forums. Beers like Julius are the reason the NEIPA sub-style has taken off to a point that most big craft brewers have given in and brewed a NEIPA in the last year.

While Julius was the starting point, it is just one beer in a larger catalogue dominated by hop-bombs, as New England Style IPAs make up the bulk of Tree House’s lineup. On my recent visit 10 of the 14 available beers were versions of this sub style, and another was a blonde ale loaded with Mosaic hops. One common complaint about breweries that make a ton of different NEIPAs is that they all taste nearly the same, but I haven’t found that to be the case at Tree House. Each individual beer is designed to allow a single variety or combination of hops to shine. They also aren’t a brewery that releases a new beer every week. While many of Tree House’s beers have variants, if there are extra letters in the name it has extra late/dry-hops and King or Very means imperial version, flagships beers like Julius, Green and Haze are produced almost every week now. One thing that sets Tree House apart is their consistency. One advantage that breweries who pump out new beers every week have is that they don’t have to worry about a flagship beer staying the same batch to batch. I’ve had Julius many times since my first growler fill in that Brimfield barn and the beer has always been spot-on.

While Tree House is known for their IPAs, they do brew a variety of other styles too. Their dark offerings, including a range of highly regarded imperial stouts and porters, many brewed with coffee and other adjuncts. They also dabble in a range of traditional styles, including highly regarded takes on brown ale, pilsner, and ESB. The “old” brewery in Monson is still very much active and is making some smaller batch and barrel aged beers, so I think we will see a much more diverse lineup coming out of Tree House going forward. The IPAs will always be the calling card for the brewery, but it is nice to see them branch out and introduce their customers to some other delicious styles of beer.

Tree House has a bunch of exciting things in the works as the brewery continues to grow and evolve. The current brewery is still new but is already undergoing a significant expansion. They are installing an extensive water treatment plant at the brewery, and a host of other improvements to minimize the environmental impact of the brewing process. This announcement was well received but accompanied by a number of jokes about how they could help the environment even more if people didn’t have to drive to the middle of nowhere to buy their beer. The biggest recent announcement is the upcoming opening of Tree House Orchard and Farm Fermentory, a 60-acre farm in Connecticut. From this farm Tree House will run a CSA, produce fruit that can be used in the brewing process, and start their own line of craft ciders.

Tree House Brewing has grown from a group of friends making beer in a barn into one of the powerhouses of the local beer scene, producing some of the most sought-after beers in the world. While I think that the crazy buzz, and the lengths that some hard-core beer geeks go through to try the beer, is a little over the top, Tree House makes a wide variety of consistently delicious beer. I am someone who is strongly against waiting in line for beer, but this is one of the few breweries where I will break that commandment from time-to-time. So, if you are in the area take some time to head out to Charlton and tell them Ryan from Hoppy Boston sent you!

Julius: Tree House’s flagship beer is still one of their best. Everything you want in a NEIPA, big citrus flavor and aroma, mild bitterness, full mouthfeel, smooth finish. A friend of mine was absolutely convinced that they had added orange juice to the beer the first time he tried it.

Green: I can never decide if Julius or Green is my favorite Tree House IPA, either one is a good decision. While Julius is pure citrus, Green has a much more complex hop profile with pineapple and tropical fruit taking center stage. This was my Super Bowl beer this year, so for me it will always be associated with ring #6 for my Patriots!

Haze: While my favorite Tree House single IPA is a toss-up, I know for sure that Haze is my favorite double IPA. Bright and bold citrus and tropical fruit flavors, and crazy drinkability for a bigger beer.

Bright: Bright is actually a series of double IPAs, each showcasing a single variety or combination of hops. The clean malt backbone really allows the individual hops to shine through. They also make a “baby” version with much lower ABV.

Bear: How many of the ultra-hype breweries in the country also brew a pretty traditional take on a brown ale? Bear lets the rich caramel malt flavors sing. It is great seeing beer geeks waiting in line and buying a brown ale!

Eureka: A series of sessionable dry-hopped blonde ales. On my recent visit to Tree House I bought some of everything, but the beer that I grabbed the most cans of was the Mosaic version of Eureka. The major reason I loaded up is that my wife loves hoppy beers with low ABVs, and she is a huge fan of this beer.