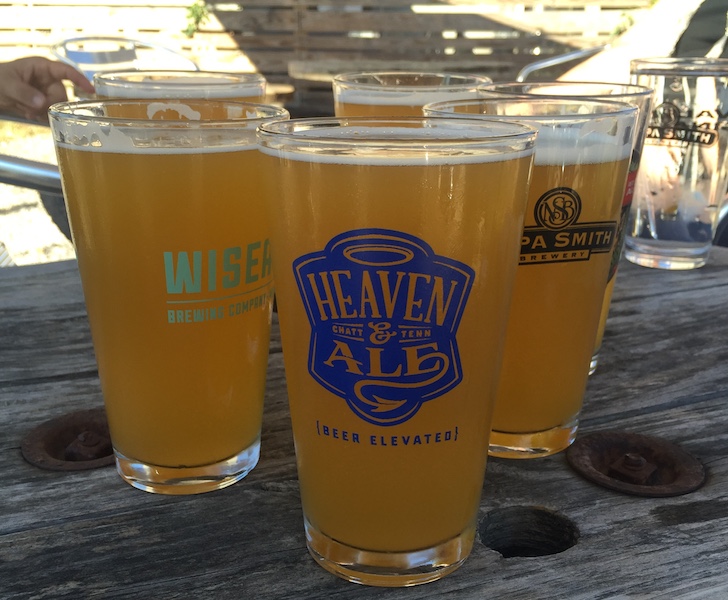 Nested in the foothills of the Appalachian Mountains, along the Tennessee River, Chattanooga is a gem of a city that has been most closely associated with a choo-choo. And while traces of the railway still echo, Chattanooga is now more well-known for its attractive waterfront area on both the north and south shore of the Tennessee River; a growing tech industry; proximity to a variety of outdoor activities like hiking, mountain biking and climbing, and, in certain knowledgeable circles, its craft beer.

Host to the Southern Brewer’s Festival, Chattanooga and its surrounds are home to seven breweries and brew pubs, with more on the way. Joe Winland, with partners Brian Winland and Marc Powell, is opening Heaven & Ale Brewing Co in June 2017. Winland, who opened the growler store and tasting room Heaven & Ale in 2013, said that he’s in a unique position to look at the craft beer market in Chattanooga: he’s seen what people love through operating the tap room.

“It’s exciting from brewer’s perspective,” Winland said. “Chattanooga beer drinkers are…reaching for IPAs first and foremost, but they’re also looking for sours, or stouts aged on interesting combinations of flavors. They want to find beers that are pushing the boundaries of what we expect from beer.”

Adventurous beer drinkers will have to wait until June to try Heaven & Ale’s offerings, which Winland said will open with 12 taps. In the meantime, here are some of the breweries that are worth sitting and sipping a spell while in Chattanooga.

Named for the fathers of modern geology, Hutton & Smith consistently creates tasty rock-and-climbing named beers, from their flagship Igneous IPA to seasonal offerings like the Belayers Blonde. Stop into the tasting room or order a pint at a bar in town.

It’s not often that you’ll find a brewpub with a Great American Beer Festival gold medal, but McHale’s Brewhouse is one of them. Their Scottish Pride won gold in 2014 in the Scottish-Style Ale category at GABF and MacHale’s continues to crank out tasty beers that are served at the brewhouse as well as around town.

Though not the original Chattanooga Brewing Company (that one operated from 1890- 1915), the “new” Chattanooga Brewing Co. is the largest in the city and keeps to the traditions of the original in the historic Southside. They serve a handful of staples, like the Chestnut Street Brown Ale and the Hill City IPA, as well as creating seasonal options throughout the year.

Yes, there are now 200 locations of this chain, but it started in Chattanooga. Since the early 1990s, this brewpub has an unbeatable location on the river and plenty of beers to sample. Try the Iron Horse Stout for an excellent beer-as-dessert experience.

Note: On Jan. 1, 2017, the limit on the sale of high gravity beer will change. A bill that was signed into law in 2014 will take effect, increasing the 5% limit to 8% alcohol by weight (ABW). In terms most beer drinkers are familiar with, instead of the current 6.2 alcohol by volume (ABV) limit, beers up to 10.1% ABV will be allowed on shelves anywhere beer is sold. Expect to hear a giant cheer rising from Tennessee on Jan. 1.

Have you been to Chattanooga? What are you favorite craft beer hangouts there?

Tips & Recipes For Infusing Beer Into Your Thanksgiving Menu Pour Me A Glass Of Beer…Or a Mug, or a Schooner, or a Tulip