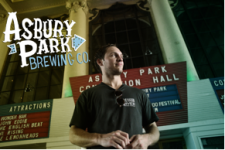 Here is an original article from our New Jersey Intern, Matthew.  If you are interested in an internship at The Full Pint, please follow this link. Cheers

Kevin Sharpe, the founder of Asbury Park Brewing Co., is taking the road less traveled in trying to fund his new brewery.

Sharpe, a veteran of the internet marketing industry is using his social media savvy and technical skills to utilize the newest funding method for creative types, which is “crowd funding.”

He has started a page on the crowd funding site Indiegogo.com to try to entice craft beer enthusiasts to help him make his dream of a brewery in the iconic Jersey Shore town of Asbury Park a reality.  He is currently running the second round of fund raising there. The first round ended on August 10th.

Sharpe, like many craft beer company founders before him, started as a home brewer. He says he began home brewing when he was out of work and couldn’t afford to buy beer and found that brewing his own was cheaper.

His recipes were always well received and he has been encouraged by most people who have tasted his beer to follow his passion and make beer brewing his full-time job.  Over the past three years he has become obsessed with beer. He has developed almost 30 different beer recipes that include pale ales, IPAs, porters and a number of seasonal brews.  He has even begun to try to grow his own hops.

The problem is that he isn’t rich and so coming up with the initial funding to start a brewery wasn’t as easy as it seemed.  But being a tech guy, he was aware of the growing trend of crowd funding online for creative endeavors and so he figured he would try to put his fate in hands of the craft beer crowd and ask for their help in funding his dream.

He has seen the success of a number of filmmakers, artists and even one or two other craft beer companies in raising funding this way so he’s developed his business plan and has created incentives for different levels of funding.

Sharpe believes that a brewery plays into the creative and artistic nature of Asbury Park.  The shore town has long been known for its ties to the arts, launching the career of Bruce Springsteen and counting many famous actors, musicians and writers among its residents; Bud Abbot, Danny DeVito and Wendy Williams, to name a few.

Sharpe has done a lot of research in creating his plan.  He has spoken to a number of local craft beer executives. He has also met with the Planning and Zoning people in Asbury Park to get feed back on restrictions for creating a brewery. He is currently in talks with local Realtors to find the perfect location for the brewery once he gets his funding lined up.

In an effort to raise awareness for his beer he has been invited to serve his beer at private art gallery events and other functions throughout Asbury Park. While he can’t sell his beer, giving it away at these private events is creating a following and he’s growing a fan base waiting for Asbury Park Brewing to become a reality.

As he gets closer to reaching critical mass in fundraising he plans to talk to some investors who will be willing to partner with him to help him get the second half of the funding that he needs once he reaches his crowd funding goal. These potential investors will be critical in helping him to make his larger investments like leasing space.

The goal of the crowd funding money will be to buy commercial brewing equipment.  He is currently brewing on a 10-gallon system.  The $50,000 he is hoping to raise will be to purchase the equipment needed to buy a 10-barrel system.

Sharpe says one of the best business lessons that he has learned in his work to get his brewery off the ground is that “beer is currency.” He has been able to barter for a lot of the professional services that he has needed.  “Most people are willing to work for beer”, he says. He has paid for his graphic designer to make his logo and for the metal worker who is creating his tap handles and for a videographer to make marketing materials all with beer.

It seems that Sharpe’s observation is the 21st century version of Oscar Wilde’s famous quote “work is the curse of the drinking class.”

If you want to give a guy some beer money, you should check out the Asbury Park Brewing Co. Indiegogo site and make a contribution.

Beyond The Pale – The Story of Sierra Nevada Brewing Co. The Brew Kettles Are On In Dallas-Fort Worth