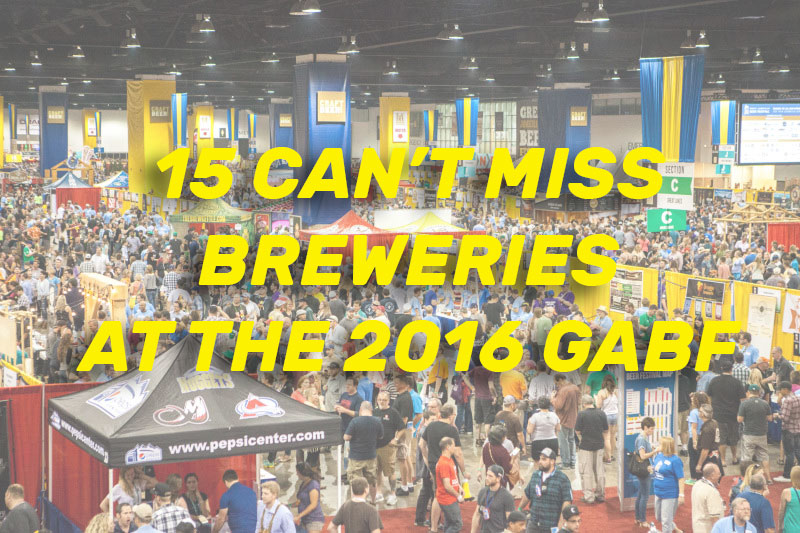 We’re Denver-bound this week for yet another beer-filled week at the Great American Beer Festival taking place October 6-8, 2017 at the Colorado Convention Center. Presented by the Brewers Association, this glorious spectacle of an event is the largest celebration of beer* in the country and gets bigger and better with each passing year. While the crowds may not be everyone’s pint of brew, there is no denying that attending GABF is one of those quintessential beer events one must tick off their list.

On the brewer’s side, entry to the annual Great American Beer Festival competition was nearly as nerve-wracking of a process as it was for beer fans refreshing the ticketing page to get into each sold out session. Unfortunately, many brewers were locked out of either the festival exhibition floor and/or the competition. Luckily for you however, there are still 3,800+ beers on display at the festival from hundreds of the nation’s breweries.

You’d be a fool not to stop by major World Beer Cup winners like Beachwood BBQ & Brewing & Noble Ale Works as well as the tried & true heavy-hitters including The Bruery, Stone, Wicked Weed, and Russian River. Then there are The Full Pint’s home-turf breweries** who’ve taken home GABF hardware (Kinetic Brewing, Smog City, and Three Weavers). But who should you try first?

Here is our list of 15 breweries you shouldn’t miss at the Great American Beer Festival. Please note: We wanted to diversify this year and decided not to select anyone who made it on our 2015 list (check that out here because they’re all still worth a visit).

Faction Brewing (Alameda, CA) – O16: This (California) Bay Area brewery has been a joy to see evolve since its founding less than a handful of years ago. A much-anticipated brewery from industry veterans Rodger Davis and Claudia Pamparana, Faction is definitely the Bay’s sleeper hit amongst more established institutions.

Fall Brewing (San Diego, CA) – O19: Just a few booths down from Faction is San Diego’s Fall Brewing. This small North Park operation is a great place to visit (just a stone’s throw from some of North Park’s best beer bars) and produces some solid brews with a touch of punk ethos. Their 2am Bike Ride coffee stout is a pleaser.

Half Acre Beer Co. (Chicago, IL) – V11: We feel that Half Acre is one of those Chicago breweries people tend to forget. While the tickers line up for their BCBS, we’ll take Big Hugs any day. We did a little happy dance when we were finally able to get fresh Daisy Cutter cans here in southern California and we think you will too.

Highland Park Brewery (Los Angeles, CA) – O27: If you’ve been paying attention to TFP these past couple of years, then you already know that we’re big Highland Park fans. They’ve got impeccable range – from delicious IPAs & stouts to the funkiest of funk – which is even more impressive after you’ve seen the size of their modest brewery which (no joke) is smaller than TFP HQ. Knowing how little they produce means you need to go see them.

Jester King Brewery (Austin, TX) – X20: It’s hard for me to write about Jester King because I want to keep them all to myself. Easily one of the best breweries in the country, these Austinites have become fermentation royalty with their exciting lineup of funky barrel-aged farmhouse ales. We don’t know what they’ll be bringing, but we’re sure we’ll love it.

Jolly Pumpkin Artisan Ales (Dexter, MI) – T9: Take note. Long before there was this insane phenomenon of beer-drinkers selling & trading for Jester King, Wicked Weed, and Rare Barrel whalez, there was Jolly Pumpkin. Ron Jeffries is the OG Real Deal when it comes to all things farmhouse and wild – simple as that.

Libertine Brewing Company (San Luis Obispo, CA) – P12: It’s been a while since we’ve made it into Morro Bay’s Libertine Brewing Co. and they have since expanded into SLO. Coincidentally, these guys also specialize in wild ales – even cultivating local wild yeasts for their brews. This brand is young and worth keeping your eye on.

Nebraska Brewing Co. (La Vista, NE) – Y21: Don’t you dare fly over this gem of a brewery. They run the gamut from their core line of every-day brews to some stellar barrel-aged offerings in their reserve series and the people are rad, too. There is a reason why they make the cut for the Firestone Walker Invitational Beer Festival every year.

Night Shift Brewing Co. (Everett,MA) – R23: While all you nerds are buying Heady and Lawson’s on eBay, we’ll be happy with a fresh can of Morph. Night Shift is on the upper echelon of northeastern gems but we feel they get a tad overshadowed by the likes of Trillium, Tree House, and the state of Vermont.

pFriem Family Brewers (Hood River, OR) – L15: This great Oregon brewery offers a stellar classic lineup but they’ve also got some exciting barrel-aged tricks up their sleeves. If you don’t have a trip up to the PNW in the works any time soon, this is your best bet to get a taste of their liquid gold.

Pizza Port (3 locations, CA) – Q11-Q13: You’d think we wouldn’t have to tell you to visit all three of the Pizza Port locations on deck for GABF, but there are a remarkable number of people unfamiliar with these San Diego area brewers. Yes, they’ve won countless awards in recent years but their beer still isn’t nationwide and you won’t want to miss it.

Saint Arnold Brewing Co. (Houston, TX) – Y11: Houston’s Saint Arnold recently hit my radar after my Texas beer trader extraordinaire sent me a bottle of Bishop’s Barrel No. 14. Their limited Bishop’s Barrel series is highly sought-after but we’ve got to give props to their highly quaffable kolsch and pilsner styles.

Societe Brewing Company (San Diego, CA) – Q28:
Another heavy-hitter from craft beer mecca San Diego. We’ve been longtime fans of Societe and have nothing more to say than drink all the beer you can. Always. Seriously.

Surly Brewing Company (Brooklyn Center, MN) – X13: Surly is one of those breweries that just scream craft brewer. They’ve got a fiercely assertive identity akin to the likes of Three Floyd’s and Stone which has grown them a loyal following. Better yet – the beer is just as strong as the attitude.

*While the Brewers Association is the national trade organization for craft brewers, non-craft macro breweries also participate in the GABF.

** Full-disclosure: I am the Executive Director of the Los Angeles County Brewers Guild which is the nonprofit advocacy organization for L.A. brewers including those mentioned in this article. My role in the organization has no bearing on my professional evaluation of these breweries – in other words, they’re genuinely, positively, absolutely, great.