10 Beers You Need To Survive The Holidays 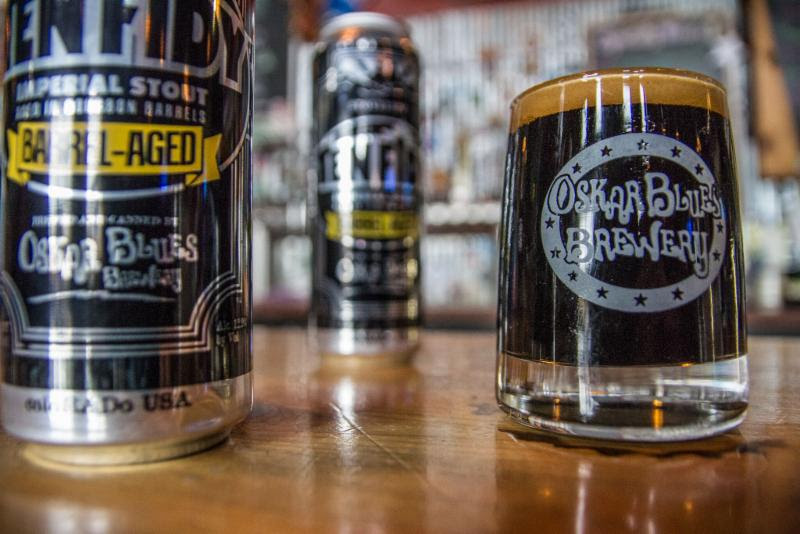 Anyone else feel like we were just here? Like we just did the whole “holidays” thing? I don’t care if you have more holiday spirit than the fat jolly guy himself, the combination of spending overtime with your family, blowing your beer budget on presents for other people, and the never-ending assault of Christmas music is brutal — which is why it’s best to be prepared. Don’t wait until it’s too late and your Uncle Sal is crushing your spirit (and appetite) with his political views around the dinner table. Prepare accordingly and stock up on one (or all) of these craft beers that will help you survive the holiday season.

Consider this your code red beer; like — the shit has hit the fan, you just became a failed fried turkey statistic, you need a drink of beer, beer. Epic Brewing recently went all out on their Big Bad Baptist series, releasing three bold, boozy versions of the highly sought after imperial stout. But perhaps the best choice, if you had to pick one, is the Quadruple Barrel option, for obvious reasons. It’s a blended version of the much-loved Big Bad Baptist Imperial Stout aged separately in both rum and fresh whiskey barrels with barrel-aged shaved coconut, almonds and barrel-aged coffee beans. However, the most important thing you need to know about this beer is that it carries a 12 percent ABV. You can purchase it in 22 ounce bottles and drink the entire thing by yourself, or have a heart, and share with your poor family members who also need a little help surviving the holiday season. epicbrewing.com

Fake it ’til you make it, right? Your Grinch sweater might say ‘I hate Christmas with a passion’ but you’ll fool your family members into thinking that you’re actually on board with the holiday by showing up with a six-pack of the iconic brewery’s popular and self-proclaimed “festive” winter ale. I mean, who knows — maybe those warming, seasonal spices and notes of dried fruit, cocoa and toffee will boost your holiday spirit. It could happen. This longtime seasonal also rings in at a sneaky 6.7 percent ABV, which you’ll appreciate more and more the longer the holiday season drags on for. deschutesbrewery.com

The holidays are a marathon, not a sprint, which is why you’ll need a little boost of caffeine to stay fueled up for all of that obnoxious holiday cheer, over-eating and stalker-like driving through different neighborhoods to judge stranger’s Christmas light hanging abilities and holiday decorating skills. Surly’s Coffee Bender is a brown ale brewed with Guatemalan coffee, which is balanced out by an oat-driven hefty malt profile. At 5.5 percent ABV, this beer is low-key enough to get your fix and still make it through a midnight mass service. surlybrewing.com

There’s going to be a moment when you absolutely can’t stomach another barrel-aged, malt bomb of a stout, or the spicy notes of your favorite Christmas ale. When that time comes, and it will, reach into your stash of Firestone Walker’s Pivo Pils to reset your palate and give your taste buds a hard-earned rest from the barrage of dark, roasty, seasonal beers that will inevitably be served at every single holiday event you go to this year. This classic pilsner with a West Coast dry-hopped twist boasts some beautiful, light notes of lemongrass and floral aromatics. Enjoy the simple, crisp flavors of this timeless beer in between gulps of boozed-up eggnog and that barleywine you’ve been saving. firestonebeer.com

Dogfish Head’s SeaQuench Ale
If your plan of attack is to stay satisfyingly sedated from November 22 through January 2, then it might be best to grab a few six-packs of Dogfish Head’s SeaQuench Ale. Not only is this lime-infused, sessionable mash-up of tart, sour and salty flavors expertly balanced, it’s only 140 calories per 12 ounce serving (versus that double IPA you typically reach for that can be upwards of 300 calories per pint). SeaQuench Ale is also brewed with potassium-rich barley strains and hydrating sea salts which are said to aid in recovery — even the I-drank-way-too-much-on-Christmas-Eve kind of recovery. dogfish.com

Out beer snob even your snobbiest of beer friends by showing up with a bottle of Blackberry Farm’s Wild Classic Saison — or basically anything from Blackberry Farm. It shows that you know what you’re talking about when it comes to beer and that you have a big enough heart to share with other people in your life. It’s what the holiday season is all about, so I’m told. Plus this beer is a lovely union of earthy flavors like dried apricots, honey and bready notes that pair well with most traditional holiday dinner menus. It’s a win-win all around. blackberryfarm.com

Although, yes, technically this a holiday seasonal release, buy this beer to mess with those fair-weather craft beer drinkers in your life. The beauty of Sierra Nevada’s Celebration is that it’s actually a hop-forward holiday beer, and loaded with a potent blend of Cascade, Centennial and Chinook hops. So for all of those people in your life that think that all holiday beers are dark and malty and full of everything sugar and spice — you’ll certainly get a little enjoyment watching them put back this hop-lovers version of a Christmas beer. sierranevada.com

Every good family get-together needs a good drinking game, and an equally good beer to go with it. This year, every time you hear someone say Merry Christmas, take a sip of Fat Head’s Holly Jolly Christmas Ale. At 7.5 percent ABV, you’ll be nice and holly jolly — even while being held hostage by the itchy tackiness of that terrible ugly Christmas sweater your Grandma bought you. The sweet, malty, gingery and honey and cinnamon forward combination in this beer will make the entire charade of your family’s holiday shenanigans so much more manageable. fatheads.com

A slice of pumpkin pie with extra whip cream? No thanks, I plan on drinking my dessert. But seriously, when the Christmas turkey is done and you’ve tupperwared up a healthy portion of mashed potatoes, cranberries and green bean casserole to eat for breakfast, sit back and relax with Southern Tier’s Salted Caramel Stout — a beer that far surpasses any holiday dessert you could fathom ending your meal with (frosted sugar cookies shaped like Christmas trees and pizzelles excluded). The beer is the epitome of a dessert beer. It’s sweet, but balanced out by the addition of Himalayan pink sea salt which gives it the same decadent flavor as a rich truffle, or a salted caramel, but it’s even better because it contains alcohol to the tune of 10 percent ABV. stbcbeer.com

If you’re straight up Chevy Chase and you’ve managed to screw up everything you’ve touched this holiday season, then break open the Barrel Aged Ten Fidy. That’s what it’s here for. If you’re a fan of deliciously dark and roasty beers, this one is definitely for you. The longtime brewery’s iconic imperial stout spends roughly a year aging in barrels still loaded with boozy flavors of a blend of some of the top bourbons around. But let’s face it, the most important characteristic of this beer that makes it the perfect holiday beer, is it weighs in at 12.9 percent ABV. Keep an emergency stash of this heavy hitter around throughout the season to get you through things like neighborhood caroling, trips to the mall and gift wrapping drinking games (lose the tape dispenser or scissors again? Better drink!). oskarblues.com