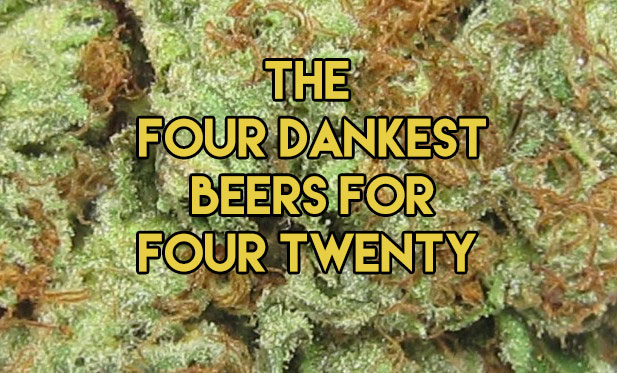 Hoppy Holidaze! Today we are celebrating dank culture. No, we are not talking about a smelly, mildew filled basement, we are talking about our favorite green plants that provide some of the most amazing, pungent aromas. One of those plants so happens to be hops.  For years now, the West Coast style of IPAs and Double IPAs have been described as dank, and we attempt to list some of the dankest. Have we missed a few? Feel free to add your favorites to this list. Cheers!

Stone Enjoy By IPA – In late 2012, Stone Brewing Co. went on a campaign of freshness by introducing Stone Enjoy By IPA. It’s a Double IPA designed to be consumed within a month or so. Many thought this was nothing more than a gimmick, but as it turns out, it’s a beer that rivals the majestic Pliny The Elder in many ways. You can crack a bottle of Enjoy By and smell it from a yard away.

3 Floyds Zombie Dust – One of the most popular beers made by 3 Floyds is Zombie Dust.  This is listed as an American Pale Ale by many, including 3 Floyds themselves, but this is a Citra hopped gem that drinks like an IPA. They can’t make enough of this beer and is snatched up quicker than it can be brewed.

Alchemist Heady Topper – Up until a few years ago, the east coast was largely known for malty, sometimes soapy IPAs. The game was changed by players in the New England region such as New England Brewing, Maine Brewing Co., Otter Creek, Lawson’s Finest and Hill Farmstead. The reigning king of the East Coast Dank is The Alchemist Heady Topper. This beer stands up to the best west coast hoppy ales made on the left coast, and has caused a frenzy up and down the eastern seaboard. Heady Topper is a strong, cloudy canned IPA with aroma out of this world . Of note they put almost as much effort into preventing bootlegging of this beer as they do brewing it. It’s that good.

Otter Creek / Lawson’s Finest Double Dose – I did a trade with a pal last year for some New England area beers, mostly Hill Farmstead. As a bonus, a bottle of Otter Creek / Lawson’s Finest Double Dose was included as a bonus.  Usually I consider bonus beers as underwhelming. Boy was I surprised.  This beer hit all the right notes in my nostrils, and tasted magical.  The packaging is very appealing and this beer is now something I’d love to have more of. After doing more research, it appears Otter Creek has a wonderful handle on West Coast style IPAs, to the point where some may start calling this style Vermont Style IPAs. MAYBE, WE’LL SEE 🙂