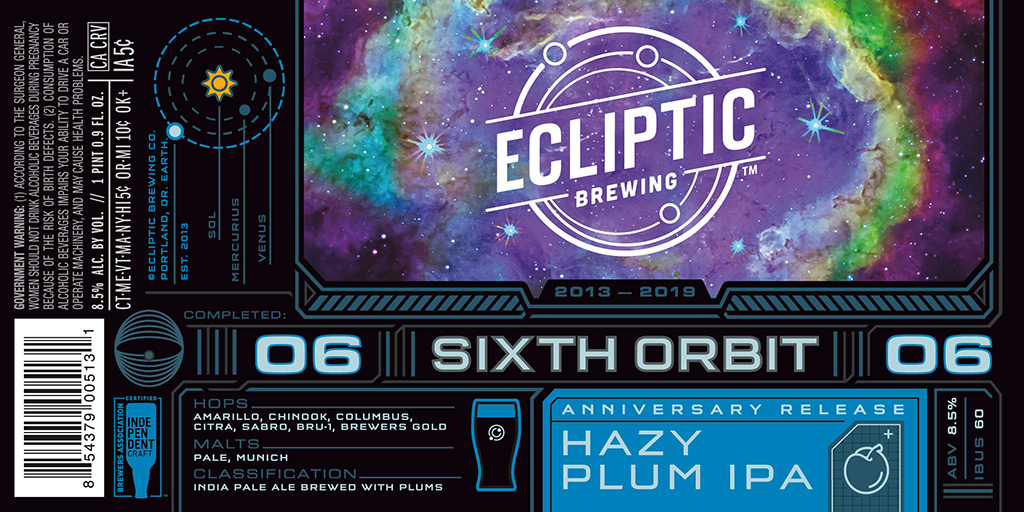 (Portland, OR. Earth.) – Oregon beer icon John Harris’ Ecliptic Brewing is about to complete its sixth orbit around the sun. To celebrate, the company is hosting a free party at the brewery on October 19th, with donations accepted to benefit the Jeremy Wilson Foundation. Additionally, Ecliptic will release its Sixth Orbit: Hazy Plum IPA at the party.

Says Ecliptic Owner and Brewmaster, John Harris, “I can’t believe it’s time to celebrate another anniversary! We are so excited to host Jeremy Wilson at the party and support his foundation again.” In regards to the latest beer in Ecliptic’s lineup, Hazy Plum IPA, Harris says he’d been experimenting with different fruits back in February and loved the contribution of plums to the ever-popular hazy IPA style. “Plums are a stone fruit, so they add a nice, subtle flavor, and we chose hops that will meld well with them, like Amarillo, Citra and Sabro.” The first keg of Hazy Plum IPA will be tapped at the party, and to-go bottles will be available for purchase.

Ecliptic’s Sixth Orbit Anniversary Party will feature multiple live band performances beginning at 6pm, with the Eyelids headlining. Harris will be leading brewery tours throughout the day, and Ecliptic’s chefs are offering free tastes in the restaurant and special rare beers from the company’s archives. Additionally, Ecliptic will be matching any donations to the Jeremy Wilson Foundation.

About Ecliptic Brewing
Ecliptic Brewing is a venture from John Harris, an Oregon beer icon whose background is steeped in the state’s rich craft brewing history. The name Ecliptic unites Harris’ two passions: brewing and astronomy. As such, the brewery celebrates the Earth’s yearly journey around the sun through both its beer and restaurant menus. Harris’ signature beers include Starburst IPA, Phaser Hazy IPA, Carina Peach Sour Ale and Capella Porter. For more information, visit: eclipticbrewing.com.