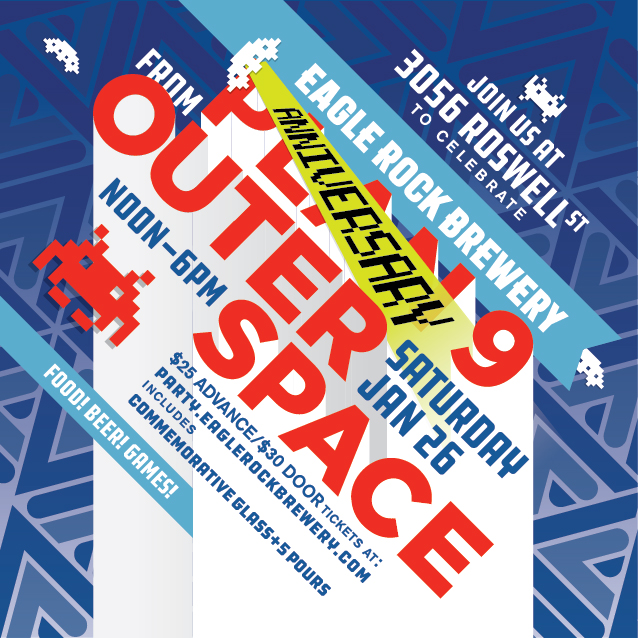 Although, the first batch brewed at Eagle Rock Brewery was in November 2009, their anniversary parties have historically been in January to allow the team to focus on spending time with their families throughout the holidays.

At their anniversary party, Eagle Rock Brewery will be pouring some of their special releases from the past 9 years, as well as some of their previous anniversary beers. Additionally, ERB will be releasing PLAN 9, their 9th anniversary beer. This beer will be an imperial pilsner brewed with all German malts and hops including Hallertau Mittelfrüh, Mandarina Bavaria, Saphir, and Magnum Hops. And since 9 years is worthy of a proper celebration, this tasty new brew boasts a super-smooth and deceptively drinkable 10% alcohol by volume.

The theme is a play on the breweryʼs original Roswell Street location and is loosely-based on a cult-classic movie called Plan 9 from Outer Space. There will be limited draft-only distribution in select locations throughout Southern and Northern California.

Be sure to get your tickets soon to join your favorite brewery team in celebrating 9 years of great locally-brewed beers!

ABOUT EAGLE ROCK BREWERY
When Eagle Rock Brewery brewed their first batch of beer in November 2009, it became the first microbrewery in decades to base its operations in the city of Los Angeles. This award-winning, family-owned and operated brewery was founded on a belief in producing unique, well-balanced beers̶never compromising quality for quantity. As Eagle Rock Brewery continues to grow, this small family of beer lovers still works hard to promote the ongoing development of the LA beer community as well as the remarkable homebrewing community from which Eagle Rock Brewery sprang. Visit our taproom, find us on draft or in a bottle shop near you, Prost!