(Tempe, AZ) – Arizona-based Huss Brewing Co. announces an exciting design refresh, including updates to cans and secondary packaging, of its iconic Papago Orange Blossom Ale. But fear not craft beer fans, Huss Brewing is not changing the recipe or the classic citrus-infused flavor of Papago Orange Blossom, continuously handcrafted here in Arizona in 2005. Available at retail shops and restaurants statewide, as well as at Huss’ taprooms in Tempe and Uptown Phoenix, the new packaging will start to appear on shelves starting on November 15, 2019. 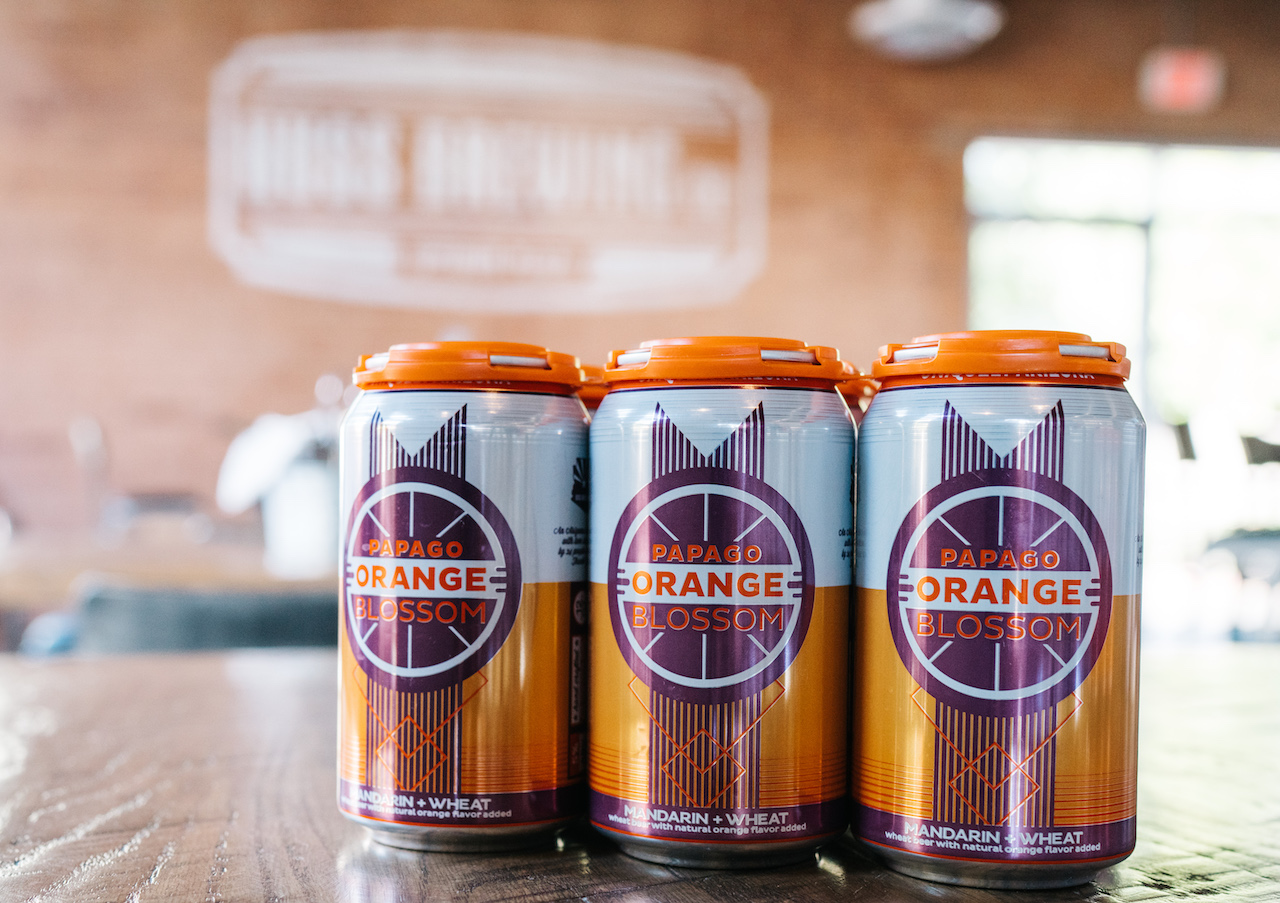 “As one of Arizona’s most iconic craft beers, after 15 years we felt it was time for Papago Orange Blossom to freshen up its look, without sacrificing that classic orange and white color scheme, or refreshing citrus- and vanilla-infused flavors,” says Huss Brewing Co. co-owner, Leah Huss. And she should know, considering that Leah Huss helped launch Papago Orange Blossom back in 2005, nearly a decade before she launched Huss Brewing with her husband and Head Brewer, Jeff Huss.

Then the Managing Partner at Papago Brewing Company in Scottsdale, Leah Huss and Papago’s ownership decided to brew up its own proprietary recipe after the brewery behind Papago’s top-selling craft beer (a Mandarin Hefeweizen) went out of business. Taking the matter into their own hands, Papago created Orange Blossom Ale, and launched an Arizona landmark.

Huss has been brewing Papago Orange Blossom Ale since 2013, and have owned the brand outright since 2016. (Papago always outsourced the brewing to local facilities, starting with Sonora Brewhouse (now SunUp Brewing) and then other local breweries, including Oak Creek, and College Street, before Leah and Jeff were able to bring Papago Orange Blossom into the Huss Family of Beers.

But most important, says Jeff Huss, the new-look Papago Orange Blossom Ale still features the same delicious recipe first crafted nearly 15 years ago. To replicate the original Mandarin Hefeweizen that Papago customers had first fallen in love with, the process called for a classic lighter American Wheat beer brewed with natural mandarin flavor. But the secret ingredient is an added hint of vanilla to bring a creaminess to the mouthfeel, reminiscent of an orange creamsicle. Or as Jeff Huss describes, “A crisp wheat beer is a classic American style of beer, and with the addition of mandarin and vanilla it becomes classic Arizona.”

About Huss Brewing
Husband-and-wife, Jeff and Leah Huss, have 33 years of combined experience in the brewing industry. Jeff was head brewer for BJ’s Brewing in Chandler, Ariz., for seven years and attended the, Siebel Institute in Chicago, then, the Doemens Academy in Munich, Germany. Leah co-owned and operated Papago Brewing in Scottsdale, Ariz., for 14 years, helping pioneer the craft beer community and growth in Arizona. Their combined love and passion for craft beer inspired them to chase their dreams of owning a local, family-owned and operated brewery with Jeff acting as head-brewer, and Leah running business and marketing operations. Huss Brewing Co. opened its doors in South Tempe in August 2013, with a 30-barrel system, a small tasting room with 20 taps, and room for growth. In 2016 Huss acquired the Papago Brewing Company in Scottsdale, creating the newly formed Huss Family of Beers and transforming Huss into the 3rd largest brewer in the state. The Huss Family of Beers includes brands Huss Brewing Co., Papago Brewing Co., and Arizona Light.