Product description: Sour Monkey puts a tastefully tart twist on our Golden Monkey’s sweet, fruity essence. A sharp, citrus-laden tang makes this brew a Monkey all its own! 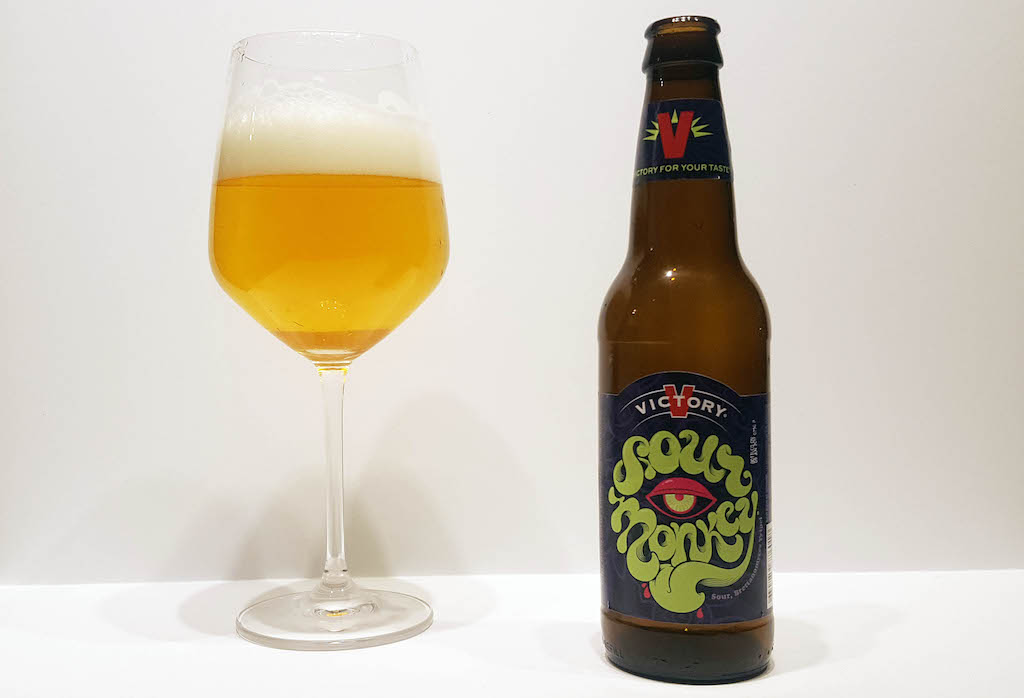 Sour beer is not the first thing to comes to mind when I hear Victory Brewing. I’m a big fan of their pilsners, and I’m also a die-hard Storm King fan. But Victory does the typical American brewpub thing and takes a stab at just about every beer style in existence from Irish dry stout to cherry gose. And to be fair, that Kirsch Gose is really well done.

I was curious about this beer since the Sour Monkey label says it is an Abbey Tripel with Brettanomyces. Brett addition almost never means the beer is actually sour in flavor. There usually needs to be some sort of lacto/pedio bacterial component to do that job. Thankfully, Victory has a video on how this beer is made:

From the video, we learn Sour Monkey is kettle-soured with lactobacillus. This is a similar process to a Berliner Weisse where the souring happens in the primary fermentation as opposed to secondary fermentation in barrels like many other sour ales.

Now that we know all about the beer, let’s dig in. I sampled this from a 12 oz bottle packaged on 6/9/2017. That makes it over 6 months old, but an abbey tripel, especially a soured one, should hold up for several years in the bottle. Into the glass, Sour Monkey is crystal clear golden in color with medium white foam that settles down quickly but still leaves a sizeable layer of foam. The aroma is similar to a Berliner Weisse in style with cream of wheat and corny grain from the pilsner malt and heavy lemon juice. The flavor begins with a butyric acid-like harsh bite that moves to a softer, pilsner-grain focused body in the mid-palate. There’s a lot of grain presence here for a sour blonde with the pilsner malt too prominent and poorly integrated. Heavy lemon and lime juice couple with a touch of saltiness to give the beer a margarita flavor, but the balance just isn’t there with apparent acidity at a 9 out of 10. In the finish, you get white grape juice and touches of butteriness perhaps from the lacto. My first impression is that it tastes like an over-the-top, high-acid Berliner Weisse.

Then comes that massive 9.5% ABV that is carried over from the base recipe for Golden Monkey. Since the beer is so acidic like margarita mix, that alcohol content is scarily hidden. Here you are drinking away like this was a refreshing Berliner, and about half-way through the 12 oz pour that ABV creeps up and it’s lights out if you’re not careful.

Overall, I think this beer needs some fine-tuning. There are harsher acids damaging the mouthfeel that shouldn’t be there, and the overall acidity is off the charts. There are refreshing moments and then there are abrasive moments. Given the high ABV and high acidity, this isn’t a beer you can sit down and relax with. You need to share it. And even then, someone is going to ask why you served them a glass of lemon juice.